KUALA LUMPUR (June 20): The Employees Provident Fund (EPF) had raised its direct stake in Petronas Chemicals Group Bhd to 7.716% after acquring 7.56 million shares in recent days amid broader market weakness ahead of the US' 75 basis point interest rate hike announcement.

Petronas Chemicals said in its Bursa Malaysia filings on Monday (June 20) that the EPF had on Wednesday (June 15) acquired a cumulative 4.56 million
Petronas Chemicals shares in two tranches, comprising a 4.5 million share tranche and 63,700 share portion.

Prior to the Wednesday transactions, the EPF had on Tuesday (June 14) acquired three million Petronas Chemicals shares, according to the filings.

Following the purchase of the 7.56 million shares, the EPF's direct stake in Petronas Chemicals rose to 7.716% as of Wednesday, from 7.659% on Tuesday (June 14), the filings showed. 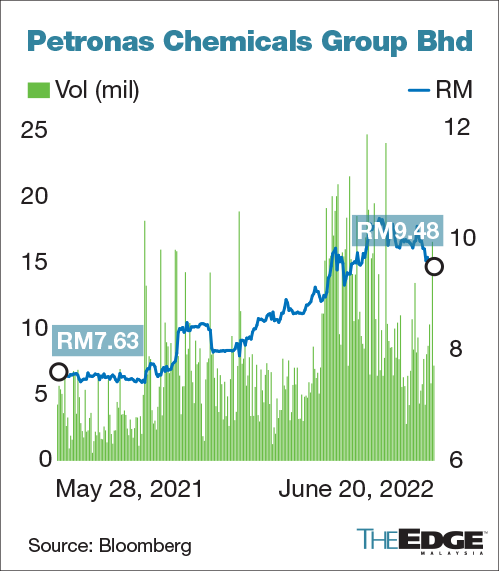 On Wednesday, the broader market fell ahead of the US' 75 basis point interest rate hike announcement then to fight inflation.

"The Federal Reserve raised its benchmark interest rates three-quarters of a percentage point in its most aggressive hike since 1994.

"Ending weeks of speculation, the rate-setting Federal Open Market Committee took the level of its benchmark funds rate to a range of 1.5%-1.75%, the highest since just before the Covid pandemic began in March 2020," CNBC reported on Wednesday, after markets were closed across Asia.

Petronas Chemicals is a KLCI constituent.

Besides the EPF, newsflow on Petronas Chemicals included one on the latter's recent acquisition of a maleic anhydride plant in Gebeng, Pahang.

Reports indicated that maleic anhydride is an organic compound, which is manufactured for the production of coatings and polymers.

Petronas Chemicals, which did not indicate the plant's purchase price, said the acquisition will enable Petronas Chemicals to broaden its current product portfolio and strengthen its focus to diversify into derivatives and differentiated chemicals.

"The maleic anhydride plant was previously shut down by BPC, following a product portfolio realignment exercise that led to the permanent closure of its butanediol and derivatives plant.

"With the acquisition, Petronas Chemicals will repurpose the plant by rejuvenating and upgrading the facility to produce higher quality maleic anhydride that is better suited to the food and pharmaceutical industries.

"In addition, the proximity of the (maleic anhydride) plant and our identified target markets within the Asia-Pacific and Indian subcontinents will enable us to provide competitive pricing to our customers,” Mohd Yusri said.

At 5pm on Monday, Petronas Chemicals' share price closed down four sen or 0.42% at RM9.48 for a market capitalisation of RM75.84 billion, based on its eight billion outstanding shares.

Petronas Chemicals' share price had fallen to current levels from its closing price at RM10.26 on May 31, 2022.