Should Cypark Shareholders be Worried? 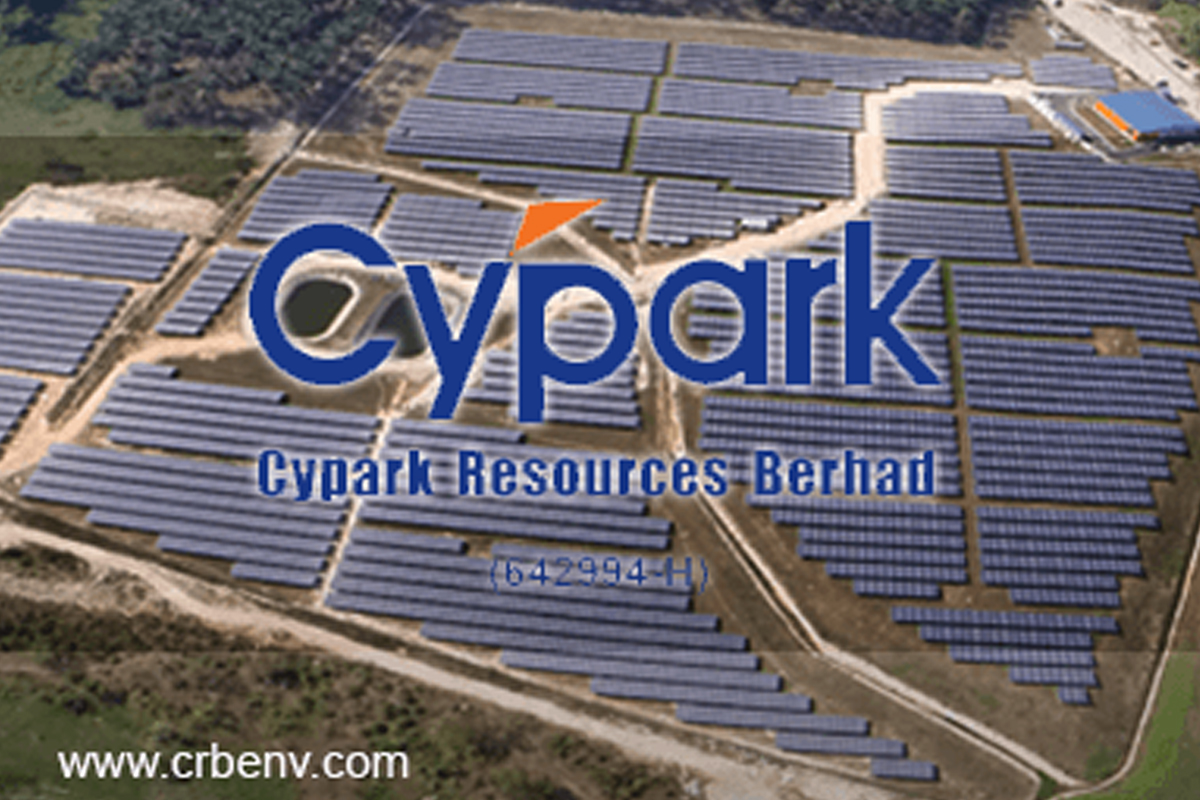 Should Cypark shareholders be worried?

STARTING out as a waste management and environmental company before venturing into the renewable energy (RE) space, Cypark Resources Bhd has been the proxy for the RE theme play, given its exposure to the niche landfill-sanitisation market and the fact that it is the only company of its kind in Malaysia.

While there have been ups and downs for Cypark since it was listed about 12 years ago, the last three weeks have been arguably the most challenging period for the company, which intends to convert solid waste into electricity. Its share price plunged 55% to 31 sen on June 10, from 69 sen on May 20.

Concerns have been raised over the delays of Cypark’s ongoing projects, including its floating solar plant in Tasik Danau Tok Uban (DTU) in Pasir Mas, Kelantan, and its solid waste modular advance recovery and treatment waste-to-energy (SMART WTE) plant in Ladang Tanah Merah in Negeri Sembilan.

Given the delay of these two major RE projects, certain quarters are wondering whether Cypark has the ability to meet its debt obligations and survive a possible cash-flow crunch. The company has been fairly profitable over the past five financial years (see bar charts), but its total cash flow from operations has remained negative.

While Cypark’s cash flow has been getting tight, as its annual report shows, its contract assets have been rising over the past five financial years, plus its trade and other receivables have jumped significantly since FY2020.

Intangible assets are another major item sitting on its balance sheet, having soared above RM900 million in FY2021.

Some quarters see these numbers as mind-boggling.

According to Cypark’s 2021 annual report, the contract assets include unbilled work performed for three solar photovoltaic power plants under the second cycle of the Large Scale Solar scheme (LSS2), which is one of the projects that have been delayed.

These three projects are financed by its wholly-owned unit Cypark Ref Sdn Bhd, a turnkey contractor and financier. The subsidiary raised RM550 million from the Sustainable and Responsible Investment (SRI) Sukuk Murabahah Programme (2019/2041) in 2019.

In return, the three clients — namely, Viva Solar Sdn Bhd, Cove Suria Sdn Bhd and Cypark Estuary Solar Sdn Bhd — will repay Cypark Ref through a deferred payment scheme upon commercial operation date (COD). According to its group CEO and executive director Datuk Daud Ahmad, the COD was supposed to be in May this year but has been delayed to September.

Viva Solar is undertaking the 49mw ground-mounted solar plant in Kedah, which was completed in January. Cove Suria and Cypark Estuary Solar are undertaking the 98mw DTU plants in Kelantan, which missed the targeted COD in May.

To restore investor confidence, Daud points out that the deferred payment is secured via the assignment of energy sales payment to be received monthly from Tenaga Nasional Bhd, as governed by the signed power purchase agreement (PPA). Nonetheless, Tenaga will not make any payment until electricity is produced.

Daud stressed that the financing structure was developed by its adviser, Maybank Investment Bank Bhd. He explains that the expected cash flow from the LSS2 project will be paired with and match its sukuk obligations.

Having said that, Cypark has incurred costs beginning in 2019 when the sukuk was issued while the company started working on the LSS2 project.

It is worth noting that although Cypark’s borrowings had more than doubled to RM1.356 billion in FY2021 from RM567.67 million in FY2017, its net debt-to-equity ratio was maintained between 0.8 times and 0.9 times. However, the company’s finance costs (of RM4.39 million in FY2021) have been rather low despite its sizeable borrowings.

In the past two years, Cypark has also jumped on the perpetual bond bandwagon. It issued unrated Islamic medium-term notes (MTN) worth RM208.9 million in FY2020 and FY2021 under its RM500 million Perpetual Sukuk Musharakah Programme.

The rationale given for the perpetual Islamic bonds was to refinance its existing financings/borrowings, as well as for working capital, investment, capital expenditure and general corporate purposes. It would also help to boost the company’s cash flow.

As perpetual sukuk is classified as equity, and not debt, there is no contractual obligation to redeem the paper. The MTN has expanded Cypark’s equity, as a result helping to prevent the group’s debt-to-equity ratio from going up.

Daud says the intangible assets are related to the work done for its SMART WTE project, which is another job that Cypark did not complete on time. The company secured the project in 2013 and inked the PPA with Tenaga in 2015. Attributing the project delay to the pandemic, he believes the WTE plant will start operation in September.

Daud explains that the intangible asset model applies to service concession arrangements where the grantor has not provided a contractual guarantee in respect of the amount receivable for constructing and operating the asset.

In a nutshell, some analysts see it as similar to “construction profit” that independent power producers book in when they are building a power plant or hydro-dam. However, due to the delay, some have reservations on the COD. 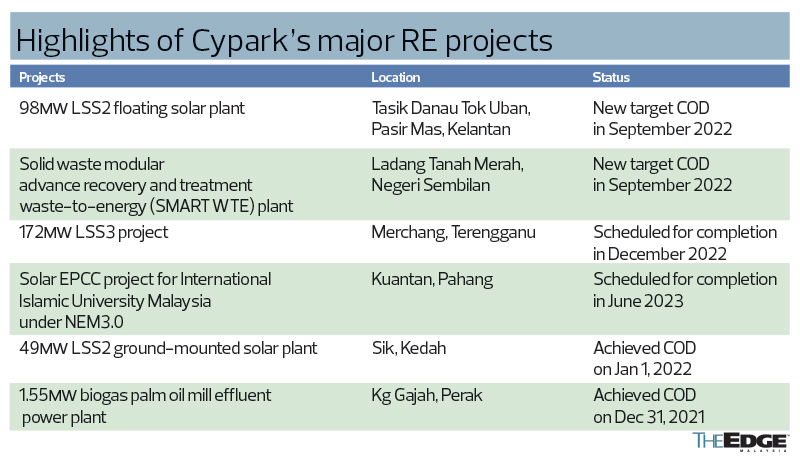 To recap, Cypark’s wholly-owned Cypark Smart Technology Sdn Bhd (CST) had on Nov 9, 2015, entered into a concession agreement with the Solid Waste and Public Cleansing Management Corp and the government, which was represented by the Ministry of Housing and Local Government.

On a public-private partnership basis, the government awarded to CST the right to undertake the SMART WTE project under the build-operate-manage-transfer concept for 25 years. Under the concession agreement, the government will deliver municipal waste from the designated scheme areas to CST for treatment and disposal at the SMART WTE, for which the company is entitled to an agreed fee, also known as tipping fees. CST is expected to generate revenue from electricity sales after converting the waste to clean renewable energy.

An accountant by profession, Daud co-founded the company in 1999. The 56-year-old remains the single largest shareholder with a direct stake of 6.76%, although he trimmed his stake from 10.02% in January this year. AmanahRaya Trustee Bhd-Amanah Saham Bumiputera is the second largest shareholder of Cypark with about 5% equity interest.

Notably, Cypark founding executive chairman Tan Sri Razali Ismail and the Employees Provident Fund (EPF) ceased to be substantial shareholders at end-May after disposing of 4.776 million shares and 14.788 million shares respectively. The 83-year-old Razali — the UN Secretary-General’s special envoy to Myanmar between 2000 and 2005 — still has about 4.29% equity interest in Cypark, while EPF still has an estimated 2.6% stake in the company.

Daud acknowledges that both him and Razali received margin calls. “[Our] share price dropped so suddenly to the lowest point since listing and in such hectic situations, the chairman and CEO were unfortunately not accorded enough banking time by the concerned bankers to rectify the margin positions,” he explains.

Year to date, the shares of Main Market-listed Cypark had declined 65% to close at 31 sen last Friday, giving the group a market capitalisation of RM184.9 million. The counter is currently trading at a historical price-earnings ratio of just 2.5 times.

Save by subscribing to us for your print and/or digital copy.

P/S: The Edge is also available on Apple's AppStore and Androids' Google Play.