I googled for additional information on the Joint Venture Project between Gadang and Capital City Property Sdn Bhd ("CCPSB").

To my surprise, CCPSB is actually related to the Hatten Group, which owns the Hatten Hotel in Melaka.

Last year, I happened to have spent a few nights there (a brand new hotel). Overall, I was very impressed with the good value for money.

I would say that Gadang has a very capable JV partner.

According to The Star article below dated 28 February 2014, the JV Project has attracted strong interest after being launched. The very innovative idea of bringing various countries' attractions under one roof seemed to fire property investors' imagination, thereby allowing Capital 21 (the name of the project) to defy the slowing property market in Johor and generates enthusiastic response from potential buyers.

IN OTHER WORDS, THE WINDFALL GAIN OF RM330 MIL IS NO LONGER A FUZZY CONCEPT, IT IS FAST TAKING SHAPE AND TURNING INTO REALITY.

Please refer to article below

Launched in December 2013, Capital 21 @ Capital City, a themed retail development located within Iskandar Malaysia development region in Johor has caught the attention of industry experts with its strong sales since its introduction into the Malaysian property market.

Two months after its official launch, Capital 21 has been drawing strong interest in Johor.

The new retail development comprising 1,200 retail units ranging from 120sq ft to 5,000sq ft, is said to be increasingly in demand among local and foreign investors.

Now, not only will shoppers have access to renowned fashion brands and international cuisine, they will also be able to experience the excitement of world cultures in one locale. The ambitious new retail model is the first of its kind in Malaysia.

For an introduction to the development’s concept, visitors can go to the Capital City Show Gallery located at 1132, Jalan Tampoi, Kawasan Perindustrian Tampoi, Johor Baru.

The gallery offers a glimpse into the actual 360° view and 3D layout of the mall with five featured capitals. Visitors can experience first-hand the lifestyle in Tokyo, the life-size windmill feature from Amsterdam, Hong Kong’s famous street markets, the ski slopes in Switzerland and the vibrancy of Madrid.

Instead of introducing the residential phase first to establish a population and consumer base for the retail element, the partners have launched the shopping mall — Capital 21 . The move was initially questioned by critics but the result speaks for itself with high sales figures recorded in just two months. When asked about the sales response achieved for Capital 21, Colin Tan, group managing director of Hatten Group Sdn Bhd, attributed the success to the passion and experience of the joint venture partners.

“With our combined expertise in the property industry, we have worked together to design and conceptualise this project and we have the utmost faith in the success of Capital City. We are pleased that the sales figures are reflecting such outstanding public trust and support,” he said.

Siow Chien Fu, group managing director of Sunbuild Development Sdn Bhd, said, “Investors are tapping into the high-potential of Capital 21 not only for its unique, multi-capital mall concept, but also due to its strategic location, its fully-integrated development layout and the surety of a guaranteed 15% rental yield for the first two years.” 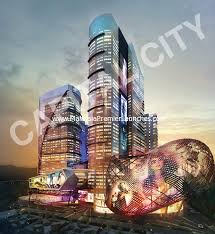 (Icon) Notion VTec - Forget About The Virus, It Is Time To Rock and Roll

(Icon) Eco World International - Why I Am Adding More

(Icon) Why You Should Learn To Invest In Overseas Stocks