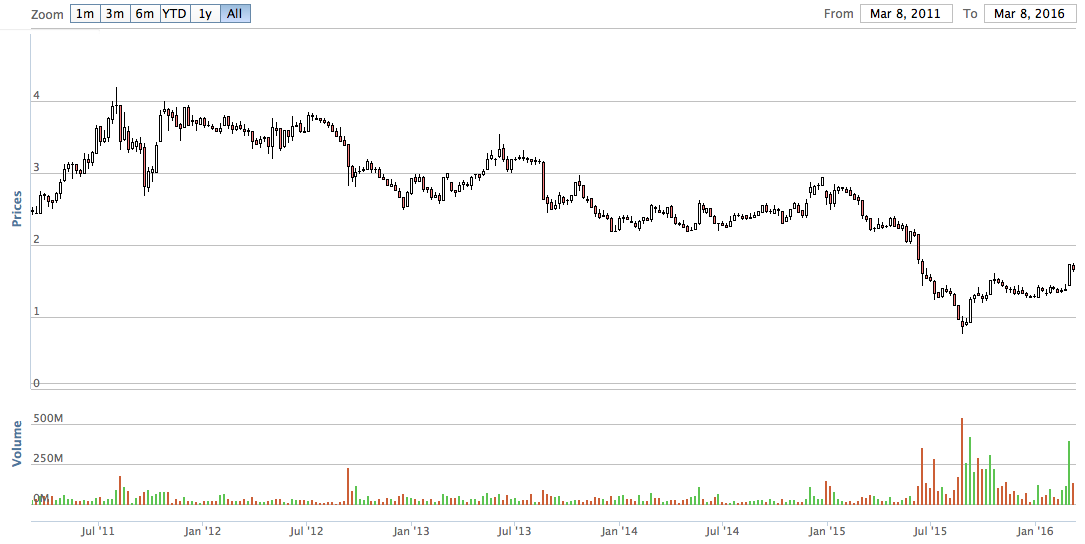 To answer the above questions, I put Air Asia's past few quarters' results in a spreadsheet and did a quick analysis. To test whether my understanding is correct, I did a back of envelope calculation.

According to quarterly reports, total fuel consumption was RM2,001 mil. It seemed that the formula works.

I understand that the group has hedged some of its FY2016 fuel requirement at USD59. Lets use that to run a simulation.

Now you know why I ask you to sell car sell house.

This item is very important. One of the main reasons Air Asia reported such strong December results was because its revenue jumped Q-o-Q from RM1.52 billion to RM2.17 billion. We need to examine the figures to find out whether it can be repeated going forward.

As shown in table above, there were two main things that caused December revenue to spike. The first one was aircraft operating lease of RM728 mil, an increase of RM484 mil compared to previous quarter's RM244 mil. The company explained that it was revenue previously not recognised due to uncertainty of recoverability. If that is the case, it will be a one off item.

The second reason was higher passenger seat sales of RM1,133 mil compared to previous quarter's RM987 mil, an increase of 15%. In my opinion, this item is indication of genuine improvement in operational performance.

Apart from fuel cost, other expenses such as staff cost, maintenance, etc remain stable and in line with historical performance.

This item is also very important. In September and December 2015 quarter, associate losses was RM625 mil and RM225 mil respectively. We need to understand how those losses arise and whether they will occur again in the future.

For comparison purpose, the table below shows both Malaysia operation as well as those of associates :- As shown above, 45% owned Thai Air Asia is quite sizeable. Its revenue was almost half of Malaysia operation. It is also profitable, with PBT of RM68 mil in latest quarter.

Indonesia Air Asia is 49% owned. Its revenue was about 1/4 of Malaysia operation. This associate incurred forex loss of RM324 mil in December 2015 quarter, and was the main reason behind Air Asia's massive associate losses of RM225 mil.

Philippines, India and Japan's operation is quite small.

I am relieved to find out that the huge associate losses seen in December 2015 quarter was due to Indonesia Air Asia's forex loss (and hence one off). This means that operationally, even though the associates are loss making, they are not bleeding the group in a big way.

In (a) above, I showed how the group will benefit from low fuel cost. The same should happen to all these associate companies as well. As such, in coming quarters, it is not inconceivable that associates contribution will turn positive.

As usual, to determine whether Air Asia is overvalued at current price, I rely on PE multiple.

Based on 2,783 mil shares and RM1.66, Air Asia's existing market cap is RM4.6 billion. Based on 10 times PE multiple (plucked from the air), I will only feel comfortable if Air Asia can generate at least RM460 mil net profit per annum.

Is Air Asia in a position to deliver ? I constructed a simple financial model to try to gain further insight :- To be objective, I chose not to manipulate any figures and instead let them flow naturally. Without any interference from me, the financial model churns out potential net profit of RM1.1 billion, or EPS of 40 sen for FY2016.

The figure looked staggering. Is it far fetched ? Is Icon8888 the only one that came up with such bullish projection ?

Not really, the following are recent analysts' forecast for Air Asia. Their figures are not as high as mine (probably due to more conservative assumptions regarding fuel cost). However, the projections are still way above market expectation (as reflected by latest market price) :- I believe the market has not fully understood the implication of Air Asia's latest turn around. Having said so, I would like to point out that RM1.1 billion net profit is aggressive and is NOT what I am targeting for in FY2016. Same as every other stock, I am only targeting 30% return for Air Asia by end 2016 (Target Price roughly RM2.20). Anything above that is bonus.

However, I am just joking when I said sell car sell house. Please buy within your means.

Last but not least, it is pointless to blame others when your investment is down. That won't help you to become a successful investor. My article should be treated as a source of information to help you to understand a stock, not a fixed deposit slip that guarantees your return.

Your money your risk your reward. Have fun.

Perhaps Capital A must be more transparent with its RPT exercises

my dipstick tells me market cap of $5 billion is too much for AA already....

my dipstick made in Mars, very reliable.

icon8888 would want to reinvent the wheel (by cut n paste) and claim as his.

Hope you can help r°Moi with this question which have been disturbing r°Moi..


Q: What are the criteria... how long must a debt be overdue.. before Price Waterhouse will ask for an allowance for doubtful debt to be made??

hi icon, what is your assumption for Crude Oil in 2016? As my only concern is AIRASIA may lose money again if Brent recent uptrend continues...

moi chai....if AA got any debtors, you better write it off.
we got pay first travel later where got travel first pay later?

Q: What are the criteria... how long must a debt be overdue.. before Price Waterhouse will ask for an allowance for doubtful debt to be made??

Take a look at Tune Protect instead. Rides on Airasia excluding the fuel risks!

Most people have recently forecast Brent Crude to trade between USD 40-USD 50 ( not jet fuel oil ). Price may be trending higher now but whether sustainable is a big Q ?

This is a very lousy answer...

You don't know what is going on

You are hereby downgraded to..... a DON'T BOTHER


stockmanmy moi chai....if AA got any debtors, you better write it off.
we got pay first travel later where got travel first pay later?

saved billions upon billions through efficiencies....and pushed down ticket prices to a fraction of what it was.


and for anyone who wants to sailang.....it makes sense to sailang a 30sen share at a PE of 1 than sailang a $ 5 billion company .

ICON Unload all his Airasia today?

Sell your house to me need it urgent
Cash ready

When everyone is buying, Tan Sri is selling...see who is the one laughing at the end

yes, that is how I feel also

as for EPF, they buy and sell all the time

yes, but for those who don't feed comfortable, just sell lor, later no need to cry father cry mother ma, i personally think this wave will go to RM2, anyway my call warrant cost is very low, so i can hold

Icon, Tuesday day almost drop to 1.60, i tot hoseh liao, can tiok optimus ggj, but it didn't happen, what a waste

but now is only mid March, the reporting period has not even ended, let alone preparation of financial accounts

if that is the case, what is the chance that Tony is selling because of bad coming quarter results ?

I sold some of my export stocks to buy this stock

for export stocks, everyday I got to watch the exchange rate movement, really tension

for airasia, I no need to worry. This is because I believe the oil glut is there. I don't need to constantly watch my back

I am writing Part 2

me too, so stressful watching the currency movement, Airasia is safer bet, short term long term also quite safe

the prospects is good, it is not easy to find something like this. I won't sell so easily.

Icon8888, I also lari kuat kuat from export stocks since January 2016. I bet on tunepro.

Yes, to win big, when you are right, you just make sure that you are completely right, i mean dare to sailang

i half sailang airasia even before the QR, I took a bet hope that the QR is good, after QR, i continue to top up, no fear

I have given a lot of thoughts about my 2016 portfolio

people like you and me are considered FA investors. NOT all the stocks we pick might give us super return, but in general their fundamentals are quite ok. As such, it is unlikely we will lose BIG money on them

the only chance we will lose BIG money is if we are caught in a major trend reversal. Exxport theme carries this risk in 2016. Many counters are up few hundred percent. The downside can be very deep.

If I avoid this risk, I should be able o avoid big losses this year.

So it is is not a difficult decision

Icon, so true, just like your tagline, just follow the smell of money, i like it very much, Airasia is a good example, i smell a lot a lot money, lol

For airasia, i throw all my TA practise aside, this stock no need look at TA at all, at least for 2016

i talked with Icon become i plp him ? Coldrisk, i mark your name first, you will know who are you messing with in future

Coldrisk, you are too honest. Get ready ypur bullet proof shirts

we are here to have proper discussion, ppl like paperplane, Optimus, Desa like to attack or badmouth other counter and spoit the party, now come coldrisks, ok lor, later kena whack don't blame me, lol

I have been saying this, the only way to stop all the nonsense & idiotic acts is to have all IDs be registered with true identity.

i3 should upgrade its system & must have all the IDs registered with true identity.

good luck icon8888, i don't understand airline business so i avoid AirAsia but you might have your points here

This nut are too high with ice !

Lol. I earn the most money in gob compare to other counter... its how u manage it...

C8mam.....the curse will fall back on you,we are not scare of your behaviour,administrator will have to ban you.