LONDON (Aug 11): Sanofi, GSK plc, and Haleon plc extended their declines and have lost a combined US$40 billion (RM177.8 billion) in market value since Tuesday's close amid mounting concerns about litigation around the recalled heartburn drug Zantac.

Sanofi fell as much as 13% on Thursday in strong trading volumes, taking its two-day decline to 20%, the steepest drop ever over that time frame. GSK slid as much as 12% in London, while its recent spin-off Haleon slumped 13%. GSK shares were at one point showing their worst one-day retreat since February 1998, before paring losses.

GSK declined to comment on stock moves and ongoing lawsuits around Zantac, while Haleon said it is not a party of the litigation proceedings and that it has never marketed the drug in any form in the US, either as Haleon or as GSK Consumer Healthcare. Sanofi did not immediately respond to requests for comment.

Zantac was a once-popular antacid that has drawn a flurry of US personal-injury lawsuits alleging it causes cancer. Sanofi, GSK, and Boehringer Ingelheim GmbH — among many other generic drug makers — are accused in the lawsuits of failing to properly warn users about health risks.

Pfizer Inc, which owns more than a quarter of Haleon, declined as much as 4% in US pre-market trading and could wipe out roughly US$11 billion if those losses hold in the cash market. Several Zantac-related lawsuits have been filed against Pfizer in various federal and state courts, according to a recent company filing.

A Pfizer spokesperson said the company sold Zantac only for a limited period of time and that it has not sold it in more than 15 years. 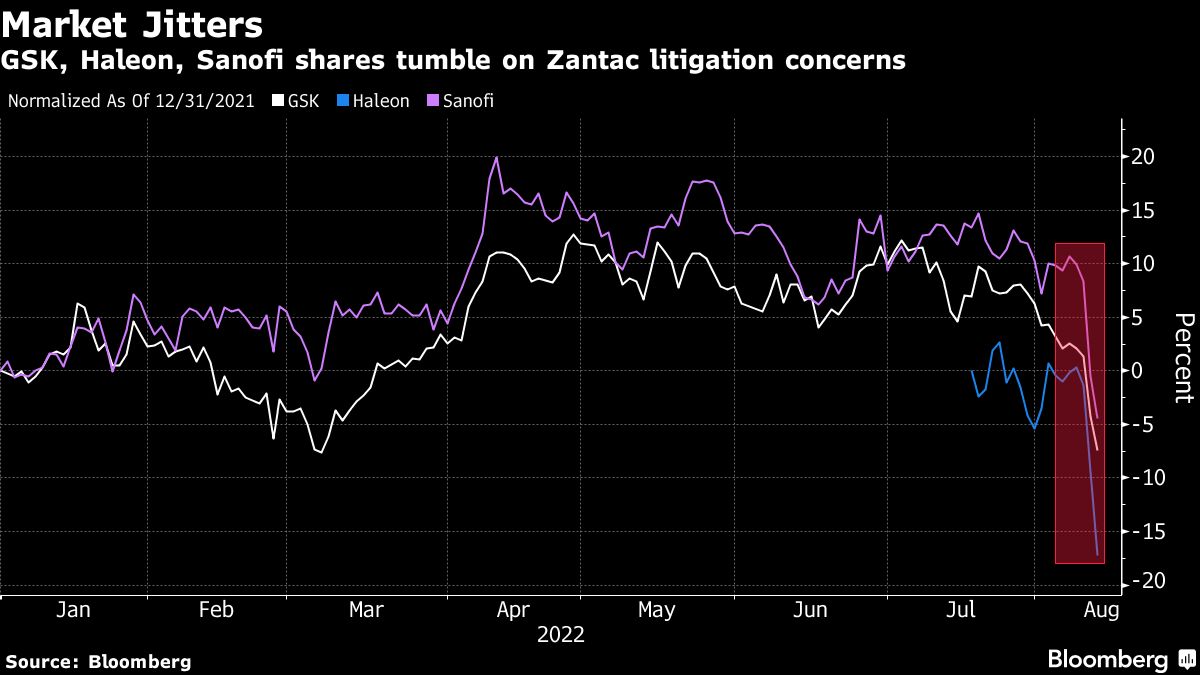 Highlighting an upcoming Illinois case on Aug 22 and some key court trials in early 2023, Deutsche Bank analyst Emmanuel Papadakis warned on Thursday that the issues are likely to act as a short-term headwind for both GSK and Sanofi shares.

Indeed, the damages could possibly reach US$10.5 billion to US$45 billion, according to analysts at Morgan Stanley, based on similar litigation settlements in the past. "There is considerable uncertainty at this stage surrounding the potential total financial impact of the Zantac litigation," they wrote.

Zantac was withdrawn from the market in 2019 after the US Food and Drug Administration said it appeared to produce unacceptably high levels of a cancer-causing chemical when exposed to heat for as little as five days.

UBS Group AG analyst Laura Sutcliffe warned that some investors are avoiding Sanofi until there is further clarity. Downgrading her rating to "neutral" from "buy", she said the litigation in early 2023 may become an "overhang" for the stock.

Sanofi has previously downplayed the risks of the litigation, with executives saying on an earnings call last month that there was no reliable evidence that Zantac caused cancer and that plaintiffs would not be able to prove their claims.

Haleon said it has certain indemnification obligations to GSK and Pfizer, "which may include liabilities related to OTC (over-the-counter) Zantac", in a prospectus ahead of listing its shares in London last month. That was while Credit Suisse analysts flagged Haleon's involvement in Zantac litigation was limited.