This stock is in Plantation sector ,

and some high level of focus will be directed to crude palm oil stocks.

SH Chan is the proxy of this palm oil stock right now.

*** it has gather and accumulated positive momentum to charge

***and need to overcome the current high

The past few trading days are very low , averaging 150 lots to 218 lots per day

Failure to hold on to the immediate support level of RM 0.50

may indicate weakness in the share price and hence is a cut loss signal,

The mythological tale of the Pillars of Hercules, tells a story that Hercules himself, while having to cross a mountain on his way to the garden of the Hesperides, used his superhuman strength to smash a mountain into two pieces that was blocking his way, rather than climb over it. When these two pieces of the mountain fell into the sea, they formed what we know of today as; Gibraltar and Monte Hacho. Ever since this tale of what happened within the strait of Gibraltar was told, these two halves of the mountain have been known as the Pillars of Hercules.
Although in today’s world we do not know of people with such super human strength as the described Greek gods. The tale of Hercules and how he managed to smash through a mountain creating to separate huge rocks, lives on. This is why when we see the strongmen preforming these super extreme holds, this is the closest thing to superhuman strength as we know it. This is why holding up two huge concrete pillars is known as the Hercules hold. Although the strongmen of today hold these pillars from falling down, this is how we would imagine the incredible Hercules would have held these rock formations from falling down if they had been a danger.

About The Hercules Hold

The Hercules hold requires the strongman to hold up two giant pillars of 160kg each for as long as possible, this is a true test of power, grip strength and determination. It is often the athlete that can best overcome the mental torment of being pulled apart by two massive weights that prevails, over the man with the superior grip or strength but cannot handle the mental torment that is applied.

Training for the Hercules Hold: The Hercules Hold is very difficult to practice as it is not often that you find two falling pillars with chains and handles on for you to hold. Even creating a make shift way to practice this can be very dangerous dependant on what you are using to hold onto. Although there are not many things that can replicate this hold, the closest thing to be able to hold a good amount of weight in each arm in this way is within a gym. While using a gym, if you take the cable crossover machine (one with adjustable height), you can replicate this hold by putting the weight nice and high on both cables, at a height slightly below your shoulders. Find a few people within the gym or even your friends if they are available, who can help and pass you a handle in each hand to hold. Once you have hold of both handles and the heavy weight is trying to pull you apart. Stay central and try to hold this weight for as long as possible. Although in the Hercules hold, you see the strongman hold on until he cannot anymore, this is only recommended if the people who are assisting you can grab the cables for when you let go. If this is not possible try to train yourself and improve your grip strength, but do not suddenly drop the handles if you have heavy weight on. One reason for this is because if you are new to this strongman exercise, you may cause yourself injury and secondly, if you suddenly let go and weights start smashing together in the gym, you may lose your membership!

The official record for the Hercules Hold was set at the Giants Live Wembley in 2019 and is in the name of Mark Felix with a stunning time of 83.62 seconds. Since then Mark Felix has gone on to set a new world record in the Hercules Hold event at Giants live Manchester in 2019 with a time of 87.52 seconds. This is currently the highest time achieved within this event and is currently the world record.

BY VIEWING ON THE VIDEO CLIP

Products using the oil such as chocolates, soaps set to get more costly

The meteoric rise in palm oil prices is poised to inflate costs for everyone from restaurants to confectionery and cosmetic manufacturers, and could potentially change consumption patterns.

The world’s most consumed edible oil has surged more than 120% in the past year and burst through 4,500 ringgit ($1,091) a tonne to a record on Wednesday. The tropical oil, which is found in products as diverse as chocolate, pastries, soaps, lipstick and biofuel, and is widely used in Asian restaurants, has been swept up in the global commodity rally as farm crops soar on weather worries and China’s crop-buying spree.

Palm oil, which is mainly produced in Indonesia and Malaysia, is so popular that one study estimates about half of all packaged products found in supermarkets contain it. While there are alternatives -- like soybean oil and sunflower oil -- prices for those have been rising too, increasing concern over global food inflation, which is already at the highest in seven years.

“We’re in uncharted waters at these levels,” said Marcello Cultrera, an institutional sales manager and broker at Phillip Futures in Kuala Lumpur. “The high prices will mainly affect costs of fast-moving consumer goods’ manufacturers in the short term.”

The biggest importer is India, followed by China. While the oil faces headwinds in Europe and the U.S. over concerns its cultivation causes deforestation, the rally in edible oil prices could add to costs at companies such as Unilever, which purchases about 1 million tonnes of palm oil, palm kernel oil and derivatives annually for use in products such as ice cream, cosmetics and soaps, making it one of the world’s largest buyers.

Consumption in India is especially at risk because of a drop in demand outside the home and the impact of the world’s worst Covid-19 outbreak, according to Atul Chaturvedi, president of Solvent Extractors’ Association. The country is a very price-sensitive market and high prices are hurting demand, he said.

Companies wanting to shift out of palm to other oils may find opportunities limited due to higher costs whichever option they choose. Soybean oil, the second-most consumed oil, is up 150% in the past year, and sunflower oil prices from Ukraine have more than doubled.

“The rise in prices to all-time highs is bound to affect consumer habits,” said Gnanasekar Thiagarajan, head of trading and hedging strategies at Kaleesuwari Intercontinental. “Consumption is expected to go down, and if this uptrend in prices is maintained, there could be a shift in food habits that could altogether change food preferences.” 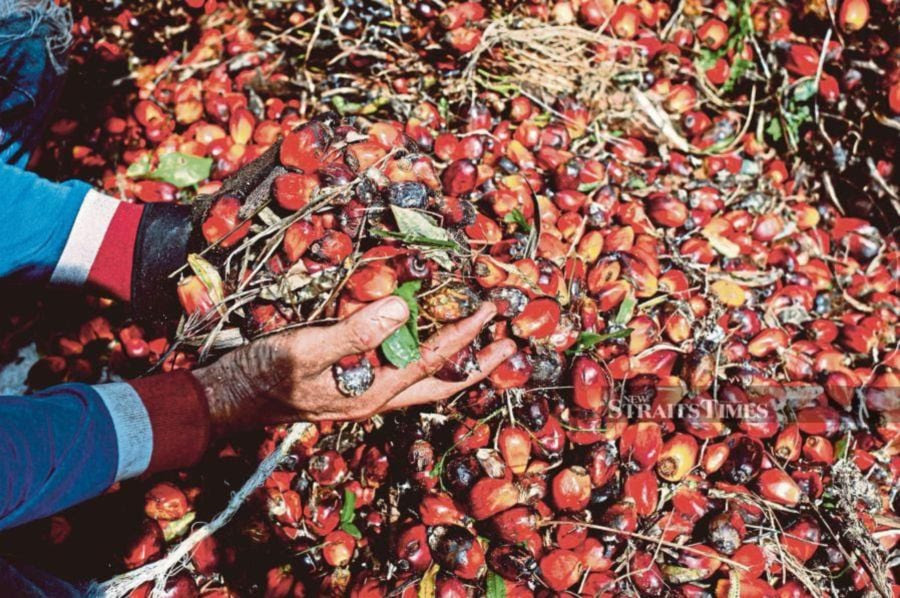 KUALA LUMPUR: Crude palm oil (CPO) is expected to average at between RM3,400 and RM3,600 per tonne this year with a possibility to test the high of RM4,400 recorded in early May, according to an industry trader.

Iceberg X Sdn Bhd proprietary trader David Ng said as the industry entered peak season, CPO prices would be supportive in the near term, with

"Some millers are being affected by the recent Movement Control Order. Labour is a prevalent issue since many months ago and is also affecting the output. I think demand is going to be pretty much robust in the 2H. The issue now is on production. If production still remains sluggish going into the 2H, prices would have to adjust accordingly," he added.

Ng said while the price would stay high for quite some time, he did not expect it to go beyond the

On production, he said the crop's output could hit a high of 18.7 million tonnes or a low of 18.3 million for 2021, which would be about a six per cent fall from last year.

According to Reuters, Malaysian palm oil futures had fallen by four per cent on Monday to a more than one-week low, weighed down by a drop in July exports and weakness in competing oils on the Dalian and Chicago exchanges.

"The benchmark palm oil contract FCPOc3 for October delivery on the Bursa Malaysia Derivatives Exchange slid 185 ringgit, or 4.23 per cent, to RM4,184 (US$990.53) a tonne in early trade to hit its lowest since July 23 after rising 2.3 per cent last week," it said.

The webinar was in conjunction with BMD's plan to launch the FEPO, a new palm oil futures contract, in the third quarter of this year.

Sabah and Sarawak contribute about 45 per cent of Malaysia's crude palm oil production.

BMD commodity derivatives senior executive Nicholas Lau said as CPO market in Sabah and Sarawak had grown significantly over the years, it sought to launch FEPO as an entirely separate contract from the existing Crude Palm Oil Futures (FCPO).

"There is little trading of FCPO from most East Malaysia palm oil companies due to the absence of East Malaysia delivery ports in FCPO.

"FEPO will directly address these concerns and entice trading, allowing these palm oil companies to hedge their position in the physical CPO market. There has been a long standing desire for BMD to make available East Malaysia ports as approved delivery points for the FCPO," said Lau.

Thanks for reading and see you in the next post.

THE ABOVE IS NOT A BUY OR SELL CALL AND IS ONLY A PERSONAL OPINION, WRITTEN AS ARTICLE FOR SHARING PURPOSES TO KLSE COMMUNITY MEMBERS.

DISCLAIMER: Investment involves risks, including possible loss of investment and other losses.

This article and charts are provided for information only and should not be construed as a solicitation to buy or sell any of the instruments mentioned herein. The author may have positions in some of these instruments. The author shall not be responsible for any losses or profits resulting from investment decisions based on the use of the information contained herein. If investments and other professional advice is  required, the services of a licensed professional person should be sought.

NOW SHOWING : THE TRILOGY OF FAST & FURIOUS ---A NEW BEGINNING FOR THIS SUPER UPTREND STOCK FROM 1 MARCH 2022

NOW SHOWING : THE TRILOGY OF FAST - the current strong man of the world ( Is TSH -T enacious S amson Hercules ) / 9059 is similar to Mark Felix ? )