Malaysia:. Bucking the regional losses, the FBM KLCI (+0.3%) closed higher after oscillating between positive and negative territories and the key index extended its winning rally. The lower liners trended higher, while the healthcare sector (+0.9%) outperforming the positive-biased broader market.

Global markets:. The US stockmarkets finished mixed as the Dow (+0.3%) closed at record high as year-end rally continued, but Nasdaq (-0.1%) edged down after hovering mostly in the negative territory. Both the European and Asia stock markets ended lower.

Another positive day for the FBM KLCI lifted by the window dressing activities on selected telco heavyweights. Meanwhile, the Omicron fears are returning, which has dampened the sentiment on the global equities. Hence, tracking the mixed situation on the global front, we expect profit taking activities may emerge. Nevertheless, we expect the downside risk to be limited on local equities as our current valuation is below the 10Y average PE, our vaccination rate is relatively high as compared to other nations as well as window dressing activities should be supporting the stocks at least for the near term.

Sector focus:. With the returning concerns on Covid-19 Omicron variant, traders may focus on healthcare or glove related stocks for the near term trades. Meanwhile, traders are advised to look out for technology and telco related stocks on the back of 5G related trading ideas. 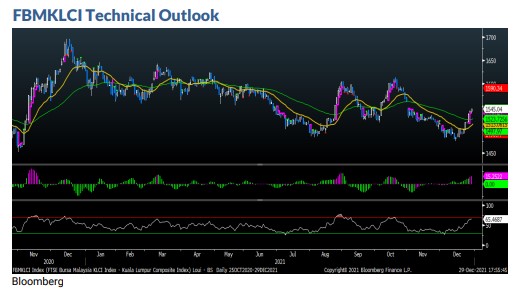 The FBM KLCI managed to hold above the daily EMA120 level after closing at its intraday high. Technical indicators remained positive as the MACD Histogram has extended a positive bar, while the RSI is hovering above the 50 level. The resistance is set at 1,560, while the support is pegged along 1,520-1,530.

Gagasan Nadi Cergas Bhd’s wholly-owned subsidiary, Nadi Cergas Sdn Bhd has received a Letter of Award from Paramount Corporation Bhd to build 1,076 highrise residential units in Greenwood Salak Perdana, Sepang worth RM195.2m. The construction works will commence in 4Q22 and the project is expected to take 48 months to complete. (The Star)

Impiana Hotels Bhd has proposed to acquire a 30.0% stake in Accuventures Sdn Bhd for RM4.2m and Impiana will be implementing digitalisation solutions for the group to manage its hospitality business operations. (The Star)

Senheng New Retail Bhd (Senheng) plans to raise RM267.5m in net proceeds from its initial public offering (IPO) on the Main Market of Bursa Securities to fund its next transformation phase and shape the nation’s new retail landscape. Senheng is expected to list on the local bourse on 25th January 2022, and its IPO exercise entails the public issue of 250.0m new shares and an offer-for-sale of 139.5m existing shares at an issue price of RM1.07 per share. (The Star)

Serba Dinamik Holdings Bhd chief executive officer Datuk Dr Mohd Abdul Karim Abdullah, who could not be located on Tuesday (28th December 2021), turned up at the Sessions Court on Wednesday to be charged in relation to the group's submission of a false statement to Bursa Malaysia. Meanwhile, the group's vicepresident of accounts and finance, Muhammad Hafiz Othman, was slapped with an additional charge at the Shah Alam Sessions Court for allegedly creating fictitious sales, causing falsified revenue to be recorded in Serba Dinamik's earnings report for the quarter and year ended 31st December 2020. (The Edge)

AirAsia Group Bhd will complete its renounceable rights issue to its existing shareholders upon listing of the redeemable convertible unsecured Islamic debt securities and warrants on Friday (31st December 2021). The group will be able to raise RM974.5m — a strong injection to support the group's overall fundraising strategy. (The Edge)

According to Tycoon Tan Sri Lee Kim Yew, SC Estate Builder Bhd's (SCBuild) existing 10 directors can be criminally liable for rejecting the nominations made by two SCBuild shareholders - Valuevest Ventures Sdn Bhd and Datuk Eric Tan Chwee Kuang - for the eight candidates to be elected to the company’s board at the annual general meeting on 31st December 2021. Lee, who is Country Heights Holdings Bhd executive chairman, is among the eight nominated candidates. (The Edge)