US raises the benchmark interest rate, impacting the global market

Will Malaysia follow the footsteps of the US in raising its benchmark interest rate? We believe that it’s a question every Bursa investor is concerned about.
In June, the Federal Reserve announced to raise its benchmark interest rate by 3 yards. From the range of 0% to 0.25% to 1.5% to 1.75% this year. Most Fed officials now predict the federal funds rate to be well above 3% by the end of this year and could hit 3.8% in 2023. With that being said, the Fed must raise interest rates by at least 0.75% and 0.5% at the September and December meeting to reach the benchmark interest rate target of 3.00%.
In contrast, Bank Negara Malaysia has only increased the overnight rate by 0.25% this year (the current rate is 2.00%). Such a slow rate hike will only result in the ringgit losing its original competitiveness.

Source:  XE.com
From the chart above, it can be observed that the ringgit is getting weaker against the USD ever since the Fed announced interest rate hikes back in March.

Why ringgit getting weaker while USD rising?

When the USD starts to rise, all the financial-related benchmark interest rates will also rise. This includes fixed deposits, bank savings accounts, and personal/business loans.
This means even if you’re just putting money into US’s fixed deposit, you’re able to gain higher profit because their interest rate is higher than Malaysia’s interest rate. To some extent, some people might even borrow ringgit from Malaysia and then exchange it for USD.  This action is called short selling of ringgit. Assuming a ringgit loan is 3%, and the US fixed deposit interest rate is 3.5%, investors will gain profit from this 0.5% difference. This explains why when the US starts raising interest rates, most money will flow to the US.

In May 2022, Bank Negara Malaysia decided to raise interest rates by 0.25%. They mentioned that the latest economic indicators show continued growth in exports and stronger domestic demand is observed, thus contributing to steady economic growth. Lower unemployment, rising labor force participation and better income prospects also further propelled the labor market.
However, BNM believes that there are still risks to economic growth. Potential risks are the lower-than-expected global economic growth, further escalation of geopolitical conflicts, supply chain disruptions, and adverse developments related to the virus outbreak. They also expect the average inflation rate to be between 2.2% and 3.2% this year.
It can be seen that despite the stated uncertain risks, BNM still remains quite optimistic about the Malaysian economy. In addition, BNM also added that domestic economic growth remains healthy.
The monetary policy committee also decided to begin reducing the degree of monetary accommodation. This will be done in a measured and gradual manner, ensuring that monetary policy remains accommodative to support sustainable economic growth in an environment of price stability.

From the following information, Malaysia's overall economy does not seem to be so optimistic in reality
Supporting data: 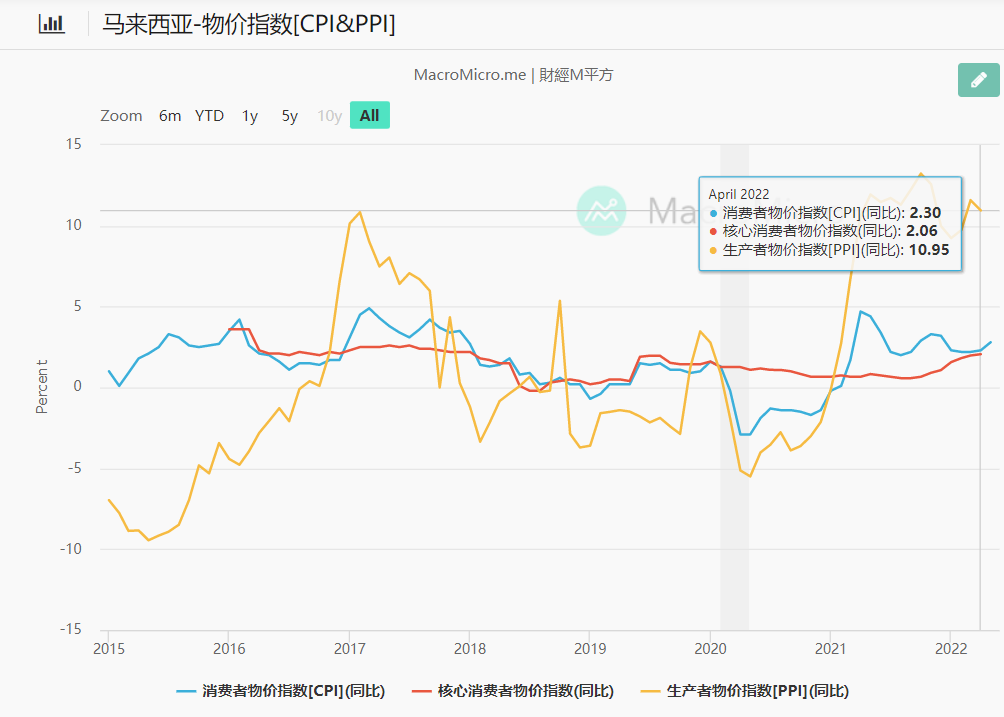 It’s all about inflation

There are two types of inflation:
1. Demand-Pull Inflation: Caused by domestic economic development, leading to increased demand, and ultimately inflation will be reflected in the consumer index (CPI)
2. Cost-Push Inflation: Caused by the rise of bulk commodities, pushing up prices, further increasing the cost of producers, which will eventually be reflected in the producer price index (PPI)
From the chart above, although the CPI remains at an average level, the PPI has broken through a new high since 2017 and remains at a high point. So inflation has gradually slipped into the daily lives of Malaysians. 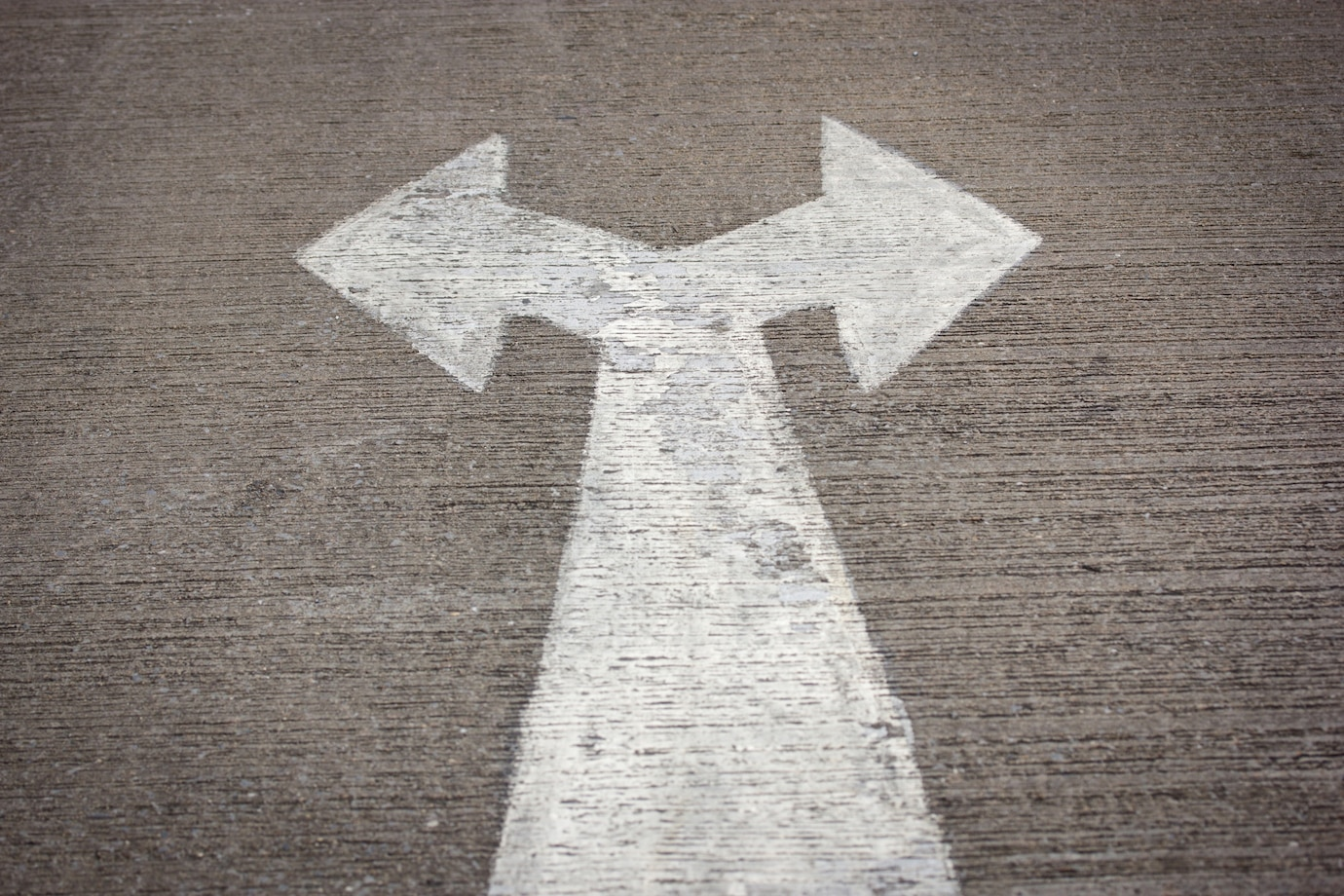 Fork in the road for Malaysia interest rates

This coming July, Bank Negara will hold another meeting regarding the existing monetary policy. Once again, Malaysia has to face a fork in the road when it comes to interest rates, whether to follow the plan to raise rates gradually and slowly to ensure the real economy is not affected, or follow the pace of the United States to accelerate rate hikes to ensure the ringgit remains strong.
If Malaysia chooses to raise interest rates slowly, the ringgit will continue to weaken and the prices of imported goods will increase, which will indirectly lead to increased consumption costs for individuals and businesses, and may lead to increased inflation. Especially at a time when the prices of all commodities are soaring, the impact may be more pronounced than expected.
If Malaysia chooses to accelerate the pace of interest rate hikes, it may suppress the overall economic growth, and the market will also digest this signal as accelerating interest rate hikes will lead to slower economic growth. However, in a more severe case, it may lead to recession. Excessive interest rate hikes will increase the cost of loans, and individuals/companies will start to reduce unnecessary expenses. For example, individuals will reduce some consumer goods, and companies will lay off employees or reduce other expenditures, which will further lead to a slow down of the overall economy. When everyone is more and more reluctant to spend, our economy will enter a recession.

The source of cause and effect

It’s like no matter which side of the fork Malaysia chooses, it will still damage the economy in different ways. Let’s go back to the source of soaring inflation in the United States. It’s not only due to excessive easing policies, but also the high oil prices caused by the Russian-Ukrainian war, and the surge in commodity prices.
To restore the stable growth of the economy, the source of soaring inflation must be solved, and that is to end the war between Russia and Ukraine. The price of oil and commodities will be able to return to a relatively healthy level, global inflation will gradually drop to 2- 4%, and the economy will be able to grow in a stable way.

We believe that BNM will continue with its original plan - to raise interest rates slowly and avoid rapid rate hikes that might eventually lead to their own turmoil. It’s not groundless to hold the above conclusion. Here are a few points to support,
First of all, compared with the inflation in the United States, the Malaysian government provides certain subsidies for fuel and food to stabilize the market price, which is to avoid the people suffering from high-speed inflation. Modest inflation will also give BNM more flexibility to adjust interest rates, to avoid excessive rate hikes that would impact the market.
Furthermore, BNM is quite optimistic based on economic indicators. They did emphasize that our country's exports have increased, domestic demand is strong, unemployment is low, and the labor force is high. From this, we can see that the BNM is still quite optimistic about the economy. If there is no black swan event, we believe that BNM  will not raise interest rates aggressively.
As for the next monetary policy meeting, let us sit tight and see whether BNM will make any shocking announcement that may impact the whole market.
点击阅读中文版

We encourage traders to try out and evaluate the MQ Trader system and provide us feedback on the features you like to see in the system. We have received many positive feedbacks so far, and we are currently compiling and reviewing them for possible inclusion into the next release of the system.
We would like to develop this system based on community feedback to cater for community needs. Thanks to all those who have provided valuable feedback to us. Keep those feedbacks coming in!

MQ Trader stock analysis system uses Artificial Intelligence (AI), various technical indicators and quantitative data to generate accurate trading signals without the interference of human's emotions and bias against any particular stock. It comprises trading strategies which are very popular among fund managers for analysing stocks.
MQ Trader stock analysis system is SPONSORED for MQ Trader members. To use this amazing tool, you can sign up via MQ Trader Sign Up!

Breaking the laws of demand, the Giffen Goods Theory

You're paying an average of RM 95 for 6 months of facemask!

How do people prepare their wealth for retirement ? - [Part 2]

How do people prepare their wealth for retirement ? - [Part 1]

How did a “lemon" is being used as an economic theory

What is MSCI Index ?

Electric Vehicles: Are They The Future?

Thanks for the sharing!