Malaysia: The FBM KLCI (-0.8%) started off the week on a dour note, dragged down by weakness in Petronas-related and telco heavyweights yesterday. The lower liners were also downbeat, while all 13 major sectors on the broader market were painted in red with the technology sector (-2.2%) underperformed.

The FBM KLCI reversed last week’s gains as the key index succumbed to broadbased selling prior to the BNM’s interest rate decision during the Monetary Policy Committee (MPC) meeting; we believe traders may focus on banking stocks for the near term. Given the lacklustre trading and the increase in continuation of net foreign selling, we opine that the local bourse may see selling pressure interspersed with bargain hunting activities in undervalued stocks. Commodities wise, the CPO traded above RM4,350, plummeting after Indonesia’s announcement on increase in export quotas, while the crude oil price closed around USD113.

Sector focus: While sentiment is likely to remain negative, the banking sector could be investors’ focus amid market’s expectation of interest rate hike in the upcoming MPC meeting. Meanwhile, the technology sector may succumb to another round of selldown amid interest rate up-cycle environment. 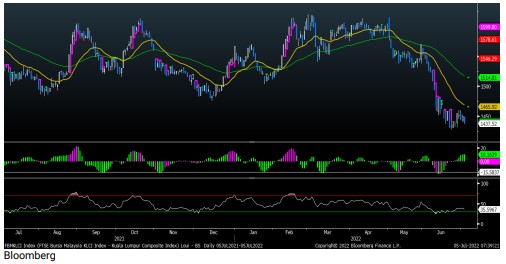 The FBM KLCI fell below its daily EMA9 amid softer trading activities on the back of cautious market sentiment. Technical indicators remained mixed as the MACD Histogram extended a positive bar, while the RSI hovered below 50. Support is pegged along 1,400-1,420, while the resistance is set at 1,460-1,480.

Pentamaster Corp Bhd's wholly-owned subsidiary, Pentamaster InnoTeq Sdn Bhd (PISB) has subscribed to a 29.9% stake in Everready Precision Industrial Corp (EPIC) for USD6.8m (RM29.9m). EPIC is mainly involved in designing and manufacturing end-to-end optoelectronics solutions that cover optical moulds to lenses and 3D sensing modules. Upon completion of the proposed subscription, PISB will be entitled to appoint one of the board of directors in EPIC. (The Star)

AEON Credit Service (M) Bhd’s 1QFY23 net profit was flat at RM163.1m. Revenue for the quarter, however, dropped 5.0% YoY to RM390.6m, mainly due to the decrease in average financing receivables. (The Edge)

Sime Darby Bhd (SDB) entered into share sale agreements to divest Weifang Port companies in China for RM1.27bn, with an indicative sum of RM357.0m as repayment of shareholder loans. This marked SDB's full exit from the non-core ports business by 4Q22. Proceeds from the sale will be utilised for future investments in the group's core industrial and motors businesses, for capital expenditure and/or to repay short-term borrowings. (The Edge)

Perdana Petroleum Bhd has received a work order extension on 14th June 2022 from Petronas Carigali Sdn Bhd worth RM8.4m for the provision of one anchor handling tug & supply vessel. This is the third contract that Perdana Petroleum has announced in 2022. (The Edge)

Hibiscus Petroleum Bhd has inked a farmout agreement for 80.0% interest and operatorship in an exploration permit offshore Australia to ConocoPhillips Australia for US$3.0m (RM13.2m) upfront and well costs of US$35.0m. Under the deal, ConocoPhillips Australia will drill an exploration well by February 2025. Hibiscus' 11.7%-owned associate 3D Oil Ltd will contribute 20.0% of costs in line with its remaining interest in the permit. (The Edge)

Mah Sing Group Bhd has launched its own homeownership campaign, dubbed "H.O.M.E" (Home Ownership Made Easy), that will run from 1st July 2022 until 30th September 2022. There are 13 participating projects in this campaign with 10 projects in the Klang Valley, one in Johor and two in Penang. (The Edge)