Global markets:. Wall Street endured another volatile spell as the Dow (-1.7%) sank after the US Federal Reserve delivered another 75 basis points rate hike and suggested that the further aggressive tightening remains in the picture. The European stock markets turned upbeat, but Asia stock markets ended lower.

The FBM KLCI slumped, taking cues from the global stock markets prior to the US FOMC meeting. As investors digested the 75-basis point interest rate hikes and the US Fed’s signals more hawkish tone into end-2022, global sentiment should remain tepid at least over the near term. Nevertheless, bargain hunting activities may emerge in selected sectors as traders may shift their focus to the Budget 2023 beneficiaries. Commodities wise, the Brent crude oil price breached below the USD90 per barrel mark, while CPO price hovered above RM3,800.

Sector focus:. While overall sentiment could remain negative, investors may buy on dips in the banking sector under the interest rate upcycle environment. Meanwhile, the market may favour the renewable energy, construction and building material segments prior to the tabling of Budget 2023. Meanwhile, we still like export oriented segment such as the packaging industry. 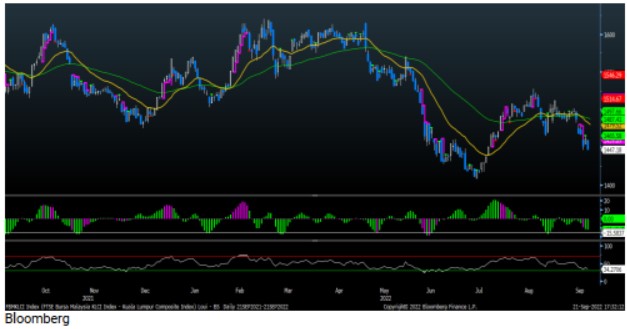 The FBM KLCI reversed its intraday gains and closed in the negative territory. Technical indicators remained negative as the MACD Histogram extended a negative bar, while the RSI hovered below the 50 level. Resistance is envisaged along 1,465-1,485, while the support is monitored at 1,430, followed by 1,410.

Ornapaper Bhd has received a conditional mandatory takeover from Intisari Delima Sdn Bhd to acquire the remaining shares in the company not owned by it at RM1.06 per share. The takeover offer was triggered after Intisari acquired 15,000 shares, or 0.02% in Ornapaper from the open market, increasing the shareholding of Intisari Delima and persons acting in concert (PACs) with it to 33.01%. The offer will remain open for acceptances until 2nd November 2022. (The Star)

Eden Inc Bhd has received compensation from the government for the acquisition of its lands in Pahang for the purpose of the East Coast Rail Link (ECRL) project, totalling RM76.9m. The decision for the consideration amount was made during the land hearing held on 4th August 2022 based on the facts presented by representatives from Eden and Malaysia Rail Link Sdn Bhd, a wholly-owned subsidiary of Minister of Finance Incorporated. (The Star)

Tenaga Nasional Bhd (TNB) is investing RM21.00bn in its Grid of the Future programme from 2022-2024 to enhance its transmission and distribution network's readiness and reliability. The company is proactively identifying transmission grid locations that will improve market integration, and will work closely with local authorities. (The Edge)

Supermax Corp Bhd has resumed its share buyback, with the company buying 3.2m shares for RM2.4m on 2nd September 2022 at between 73-75 sen per share. Following the share buyback, Supermax's cumulative number of outstanding treasury shares stood at 59.0m shares. (The Edge)

Malayan Banking Bhd (Maybank) plans to run a pilot climate stress test in 2022 to better understand how its business strategy and performance will be affected by climate change. The group has been engaging with stakeholders, including regulators as well as those involved in business and support functions, in an effort to develop a prototype climate-scenario analysis. (The Edge)

The Centre to Combat Corruption and Cronyism (C4) has questioned why Tan Sri Lodin Wok Kamaruddin, the former chairman of Boustead Heavy Industries Corporation Bhd (BHIC) and one of the key figures in the Littoral Combat Ship (LCS) scandal has not come under the scrutiny of the authorities, given his involvement in the supply chain companies for the scandal-tainted project. During his leadership of BHIC, Lodin had facilitated the setup of shell companies such as Contraves Advanced Devices Sdn Bhd and Contraves Electrodynamics Sdn Bhd, the main contractor responsible for the procurement of various components for the LCS with the intention of using the companies as vehicles to avoid detection of fund misappropriation. (The Edge)

Kronologi Asia Bhd’s 2QFY23 net profit fell 39.2% YoY to RM3.1m, due to higher finance cost and depreciation of property, plant and equipment arising from the investment in infrastructure equipment for EDM As-A-Service. Revenue for the quarter declined 15.0% YoY to RM63.1m. (The Edge)

OTHERS DEVELOPMENT ON NOTICES OF ASSESSMENT RECEIVED FROM INLAND REVENUE BOARD OF MALAYSIA BY KAPAR ENERGY VENTURES SDN. BHD. - HIGH COURT UPDATE