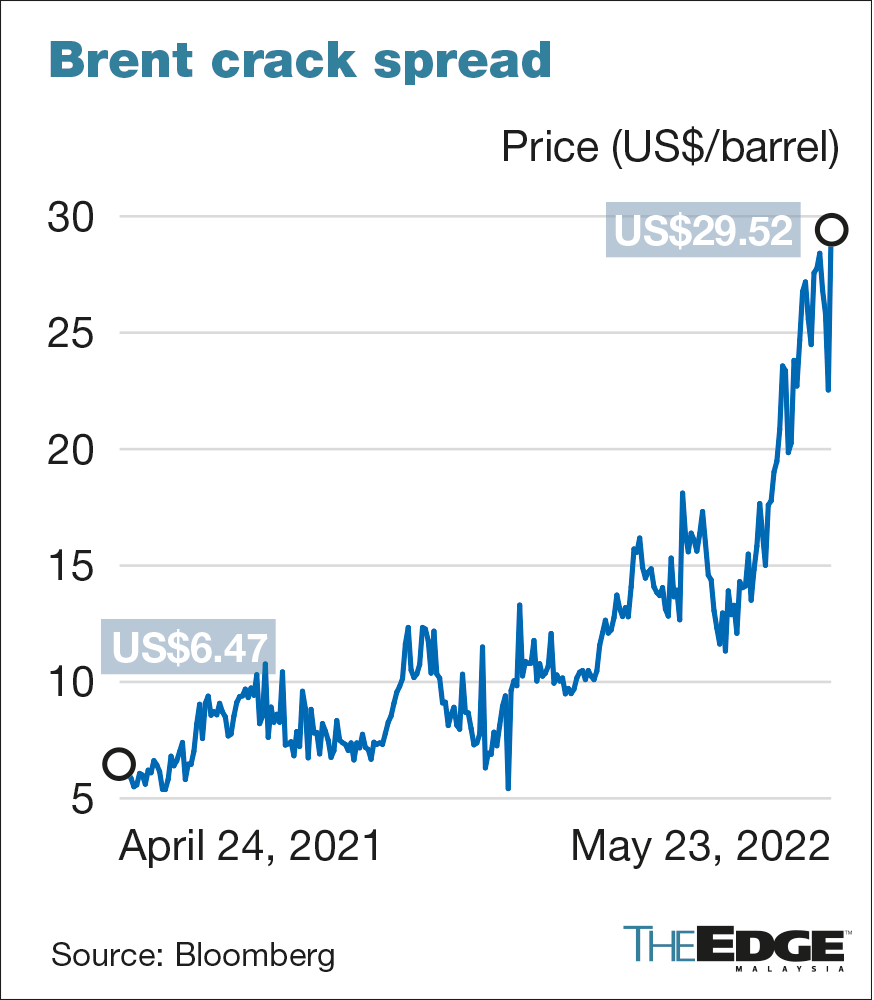 KUALA LUMPUR (May 24): Driven by the jump in crack spread prices, the shares of Hengyuan Refining Co Bhd and Petron Malaysia Refining and Marketing Bhd, which are exposed to the downstream refining business, have surged 85.3% and 62.8% respectively year to date, outperforming the Bursa Malaysia Energy Index’s 21% gain.

Analysts generally believe that refining margins will remain large as long as Russian oil exports are banned. Russia’s oil supply has been squeezed by sanctions from various countries, including the US.

Singapore Mogas 92 Brent Crack Spread hit another record high of close to US$30 a barrel on Monday (May 23), which is way higher than its 2017’s peak of US$18 a barrel. Compared to a year ago, it was up more than four times.

The spread refers to the refining margin between crude oil prices and their refined finished products, primarily RON92 and RON95 gasoline or motor gasoline (mogas).

An O&G analyst who declined to be named said it was mainly driven by Russia’s oil export ban and the recovery in the aviation sector.

“The ban on Russian oil has created a shortage in the global oil space. The European countries — which used to import refined products like gasoline and diesel from Russia — now have to import from the US and the Middle East. Asian players also need to get supplies from the Middle East. All these have raised the refining margins.

“On the demand side, as the aviation industry is recovering, demand for jet fuel will increase, thus creating more demand for refined products,” he told The Edge.

Russia is the world’s third-largest oil producer, and it supplies about 40% of Europe’s natural gas. Note that Russia production fell 9% in April and it produced far below levels required under a deal to gradually ease record output cuts made during the worst of the pandemic in 2020.

Another analyst said that the crack spread is likely to remain elevated, but it is hard to tell whether prices have reached their peaks.

“When refineries are at full capacity and yet can’t meet all the demand, that’s when the crack spreads to spike,” he said, noting that the upcoming financial results of downstream players should be commendable.

HLIB Research in a May 17 note highlighted that the surge in refining product margins is a lingering problem arising from structural issues that are not able to be addressed in the near term. They are a demand surge in a post-pandemic era; a supply shortage due to years of underinvestment and ESG-related pressures; as well as sanctions on Russian oil.

However, the research house noted that it is unsure of the spot/hedge portion for both Hengyuan and Petron, as refineries typically take on progressive hedging positions (forward sales). 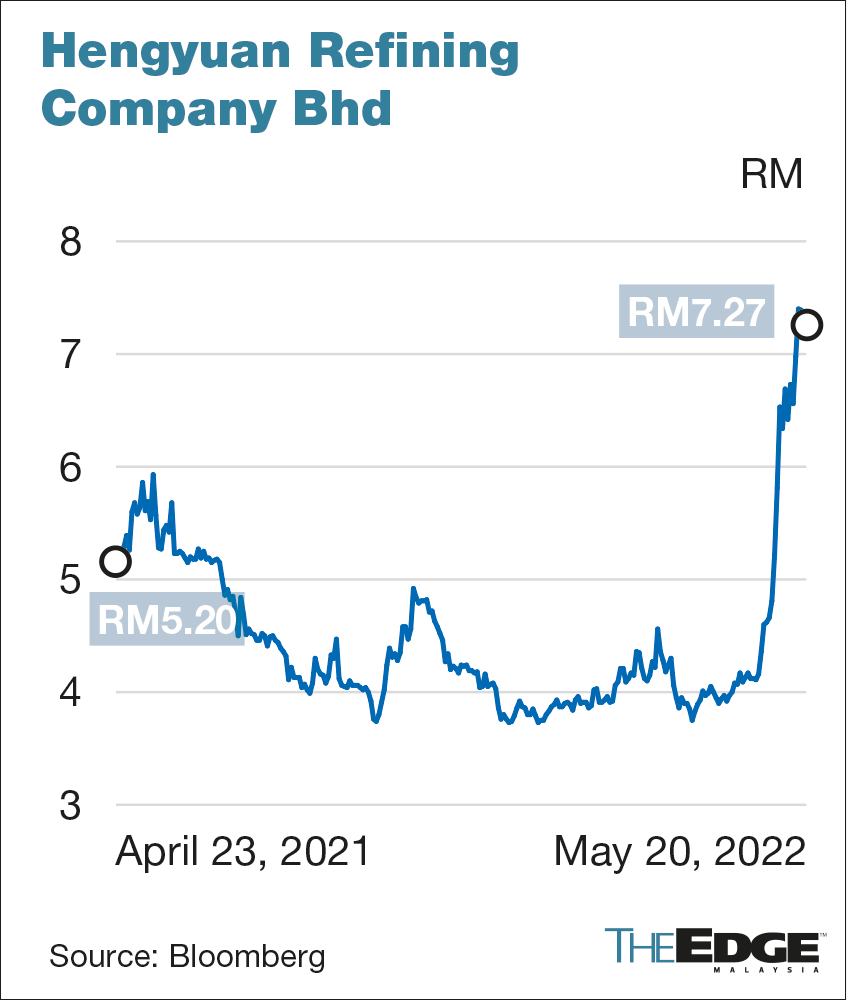 Recall that Hengyuan and Petron hit their peaks at nearly RM20 and RM15 in December 2017, respectively. However, the former plunged to RM6 in just four months, as its margins were hit by higher oil prices that drove up feedstock costs. Similarly, the latter halved to below RM7 over the same period.

Based in Port Dickson, Negeri Sembilan, it has the capacity to deliver up to 156,000 barrels per day of petroleum products to customers mainly in Malaysia and Southeast Asia. 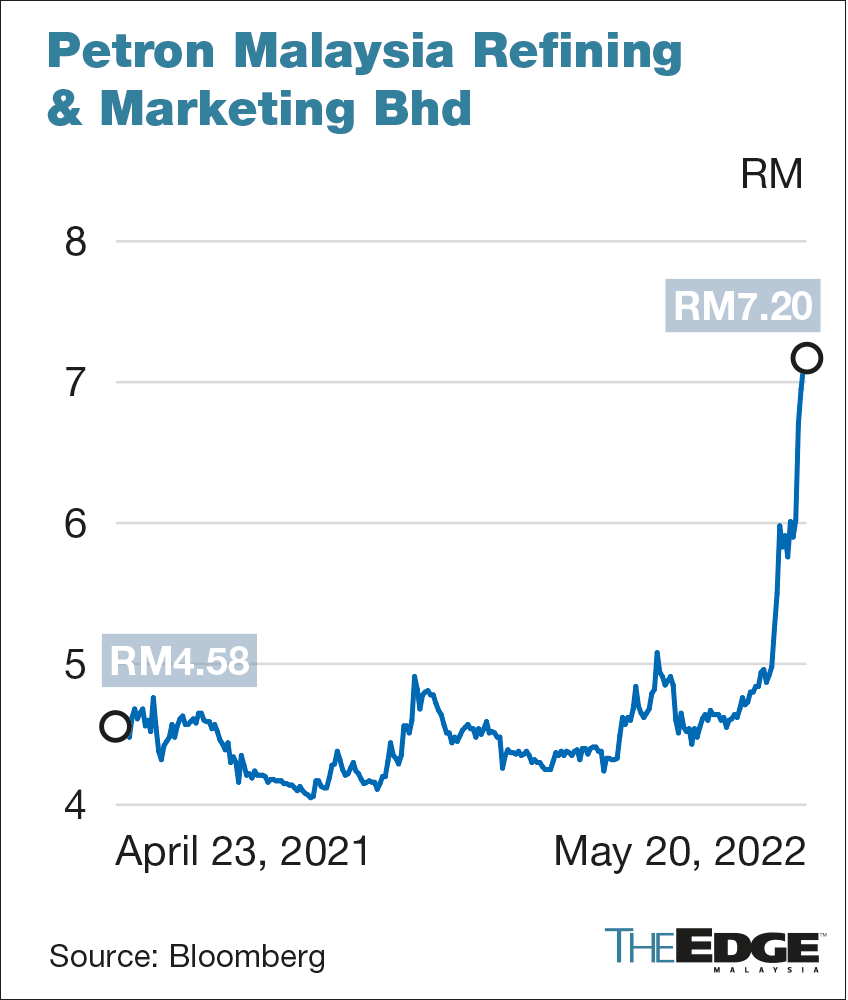 Meanwhile, Petron returned to the black in FY21 with a net profit of RM238.47 million versus a net loss of RM13.32 million in FY20, underpinned by higher oil prices and domestic demand.

Petron owns and operates the Petron Port Dickson Refinery, which has a capacity of 88,000 barrels per day, producing gasoline, diesel, liquefied petroleum gas and aviation fuel.

Hengyuan is currently trading at a trailing 12-month price-to-earnings ratio of 26 times versus Petron’s 8.1 times, according to Bloomberg.

Zahid defends not asking two donors where RM7m was from, says would be ‘funny’ to question if money was dirty