JPMorgan Chase & Co forecast this week that American gasoline could surge to as high as $6.20 a gallon by August

US pump prices have now risen above $4 a gallon in all states for the first time ever as the summer driving season approaches. JPMorgan Chase & Co. forecast this week that American gasoline could surge to as high as $6.20 a gallon by August, which would be more than double the price a year ago.

Motor fuel is taking over from diesel as the major focus of fuel supply fears, with the tightening market stretching a global refining system that was hit by closures over the last couple of years due to Covid-19. In Asia, gasoline margins have doubled to more than $33 a barrel since the end of March and have edged above those for diesel, which have eased from a peak in early May. 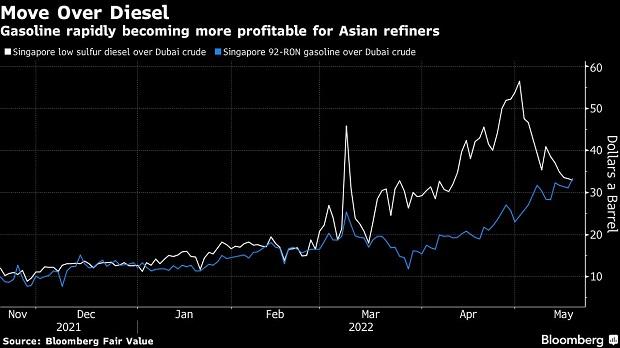 “The tightness in the Atlantic Basin, especially in the US, should continue to see Asian gasoline barrels pulled West,” said Dylan Sim, an analyst at FGE. “This will mainly come from India, with several major refineries in the country postponing their planned maintenance to August-September.”

Asia’s gasoline deficit will narrow from an estimated 260,000 barrels a day in June to 110,000 barrels a day in the three months through September as plants return from maintenance and the PRefChem facility in Malaysia ramps up, the industry consultant said in a note. That should provide more scope for the region’s processors to increase exports.

The Indian shipments are likely to come from private refiners like Reliance Industries Ltd. and Nayara Energy Ltd., as the state-run processors have an obligation to meet domestic demand. The nation’s gasoline exports jumped to a five-year high of 1.6 million tons in March, the latest available data show, and domestic prices that have remained unchanged since early April are incentivizing refiners to send as much fuel abroad as they can.

Factors that could limit the amount of gasoline Asia can send to the US would be a comeback in Chinese demand, or an acceleration in consumption in the rest of the region. Crude processing in Asia’s largest economy tumbled to the lowest in more than two years last month, but it could recover quickly if China can put the worst of its current wave of virus outbreaks behind it.

While China is yet to rebound from the hit to oil demand due to Covid-19, fuel consumption in South and Southeast Asia is recovering strongly as restrictions ease, said Max van der Velden, an analyst at Wood Mackenzie Ltd.

5 Things That Could Go Wrong With A Coronavirus Vaccine

LUXCHEM - the "direct proxy" to GLOVES

What Covid-19 is showing the world

“The affected plant will be shut down until the root cause is identified and preventive measures are put in place,” Chief Executive Hussain A. Al-Qahtani said, apologizing during a press conference.

Its the 5th largest refinery in the world

Asian gasoline cracks soared to new highs on Friday after an explosion at a South Korean refinery compounded an already-tight regional supply picture.

The move comes after an explosion at alkylation processing unit of the 580,000 bpd Onsan refinery left eight injured.

Owned by S-Oil, the refinery is the world's fifth-largest and any restriction of supply will put regional import pressure on an already-tight global market.

The jump was seen in the overnight market, with the east-west spread jumping by the European close on Thursday.

It comes against a backdrop of booming products demand, with tight supply as the global economy reopens from the Covid-19 pandemic having driven cracks to record highs even before Thursday’s accident.

S-Oil export to Malaysia, so Hengyuan can be almost certain the same margin