Malaysia:. The FBM KLCI (-0.1%) faltered, snapping its six-session winning streak as weakness among Petronas-related and banking stocks dragged down the key index. The lower liners, however, extended gains, while the broader market traded with positive bias, led by plantation (+0.7%) and the telecommunication & media sectors (+0.7%).

Global markets:. The US stockmarkets skidded despite a lower-than-expected weekly unemployment claims as the Dow (-0.3%) reversed all its intraday gains. The European stock markets advanced, while the Asia stock markets finished mixed.

We believe the year end window dressing should sustain the current rebound momentum. Also, with both the Bursa and MOF adjusted on the share trading stamp duty charges with a capping of RM1,000, we expect this should cheer the market players at least for 2022. Meanwhile, Omicron fears are still uncertain, hence there might be short term trading activities on healthcare stocks. Nevertheless, we believe market participants will put more attention on recovery theme sector as we view the Omicron impact will not contribute to a full lockdown at least for the near term.

Sector focus:. Amid the ongoing window dressing activities, we believe traders will continue to focus on heavyweights. Meanwhile, traders may lookout for solid fundamental companies under the consumer sector for the recovery theme. Also, we expect technology sector will remain as the leader going forward amid the steady earnings visibility. 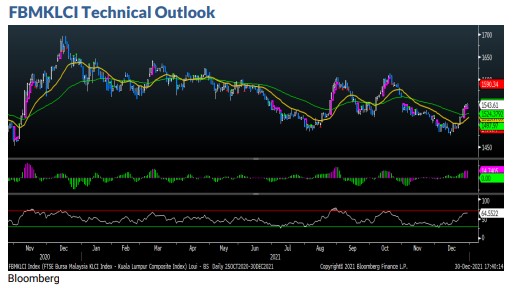 The FBM KLCI (-0.1%) retraced and registered mild losses after the recent rebound. Technical indicators remained positive as the MACD Histogram has extended a positive bar; note that the RSI is hovering above the 50 level. The resistance is located at 1,560, while the support is envisaged along 1,520-1,530.

Pharmaniaga Bhd's services for the provision of medicines and medical supplies to the Ministry of Health’s facilities have been extended for another year from 1st January 2022 to 31st December 2022. The extension was granted to its whollyowned subsidiary Pharmaniaga Logistics Sdn Bhd, pending the finalisation of new logistics and distribution concessions. (The Star)

Serba Dinamik Holdings Bhd and its officers have obtained legal advice and will be defending the charges against them vigorously. The company will make further announcements as and when there are material developments on the matter. On 28th and 29th December 2021 respectively, the Securities Commission Malaysia charged the company and its executive director Datuk Syed Nazim Syed Faisal, group chief financial officer Azhan Azmi, accounts and finance vice-president Muhammad Hafiz Othman and group managing director and chief executive officer (CEO) Datuk Dr Mohd Abdul Karim Abdullah under Section 369(a)(B) of the Capital Markets and Services Act 2007. (The Star)

Cypark Resources Bhd’s 4Q21 net profit rose 20.0% YoY to RM25.7m, mainly due to savings achieved in finance costs and tax expenses, as well as higher revenue amid continuous work progress from its large-scale solar projects and specialist and consultancy work performed. Revenue for the quarter improved 6.4% YoY to RM87.0m. (The Edge)

Poh Huat Resources Holdings Bhd’s 4Q21 net loss stood at RM3.5m, vs. a net profit of RM25.6m in the previous corresponding quarter as prolonged shutdown of both its Malaysia and Vietnam operations has resulted in a drastic drop in production and shipment. Revenue for the quarter plunged 75.5% YoY to RM53.1m. A final dividend of 2.0 sen per share was declared. (The Edge)

Inta Bina Group Bhd’s unit Inta Bina Sdn Bhd has bagged a contract worth RM79.8m from Eco Majestic Sdn Bhd to build 149 double-storey houses of various sizes for a gated and controlled community housing scheme (strata property) in Precinct 6 in Beranang, Hulu Langat, Selangor. The project, which will include the construction of two power substations, will start on 5th January 2022 and be completed in 20 months. (The Edge)

Malaysia Airports Holdings Bhd (MAHB) has upsized its Islamic bond or sukuk issuance to RM800.0m from the initial target issue size of RM500.0m under the group's RM5.00bn sukuk wakalah programme on robust demand for the firm's securities. MAHB issued the RM800.0m bonds on Thursday in three tranches comprising RM475.0m, RM225.0m and RM100.0m portions respectively. (The Edge)

Yang di-Pertuan Agong Al-Sultan Abdullah Ri'ayatuddin Al-Mustafa Billah Shah has raised his stake in WZ Satu Bhd to 9.8% after the King converted 53.6m Islamic convertible preference shares in the civil engineering and mining group into ordinary shares. As a result, his shareholding was raised to 100.0m shares, from 46.2m shares as of 30th April 2021. (The Edge)

The Indonesian government has filed a RM293.7m lawsuit against TDM Bhd's oil palm unit PT Rafi Kamajaya Abadi for allegedly acting illegally in relation to a fire incident at the subsidiary's land in West Kalimantan province in 2019. The republic's Ministry of Environment and Forestry is claiming damages for the loss of ecology, loss of economy and compensation costs for the environment impact verification. The claim also includes a compensation of RM214.3m to make good an area of 2,560ha affected by the fire. (The Edge)

Syarikat Takaful Malaysia Keluarga Bhd has appointed Takaful Ikhlas Family Bhd president and CEO Nor Azman Zainal as its new group CEO, effective 1st January 2022, to replace Datuk Seri Mohamed Hassan Md Kamil who is retiring. (The Edge) Tycoon Tan Sri Lee Kim Yew has emerged as a substantial shareholder of SMTrack Bhd, following his acquisition of 28.5m shares (equivalent to a 5.1% equity stake), in the company on 29th December from the open market. (The Edge)

Sarawak Cable Bhd has triggered the suspended criteria of Practice Note 17 (PN17) as its shareholders' equity on a consolidated basis was 50.0% or less of its share capital, based on its financial results for the quarter ended 30th November 2021 announced on 30th December 2021 (Thursday). The company, however, will not be classified as a PN17 company, thanks to Bursa Malaysia's relief measures. (The Edge)

EMPLOYEES PROVIDENT FUND BOARD (a substantial shareholder) acquired 367,600 shares on 17-May-2022.

EMPLOYEES PROVIDENT FUND BOARD (a substantial shareholder) disposed 100,000 shares on 13-May-2022.

EMPLOYEES PROVIDENT FUND BOARD (a substantial shareholder) acquired 345,000 shares on 13-May-2022.

EMPLOYEES PROVIDENT FUND BOARD (a substantial shareholder) disposed 16,500 shares on 11-May-2022.

EMPLOYEES PROVIDENT FUND BOARD (a substantial shareholder) acquired 122,400 shares on 11-May-2022.