This article first appeared in The Edge Financial Daily, on December 11, 2015.

UOA Development (Fundamental: 3.0/3, Valuation: 2.4/3) announced a stellar set of earnings results for 3Q2015 — despite the slowdown in the property sector. Revenue surged 40.7% y-y to RM492.2 million while net profit grew an outsized 54.1% to RM158.5 million, due mainly to higher progress billings from ongoing developments and the completion of Vertical Office Suites at Bangsar South.

For 9M2015, net profit rose 34.4% to RM305.9 million on the back of a 52.1% growth in revenue to RM1.1 billion. Ongoing projects are Desa Green, Scenaria@North Kiara Hills, South View Services Apartments, Southbank Residence, Desa Sentul and The Vertical Corporate Tower.

Property sales were lower at RM708.4 million for 9M2015, down from RM1.4 billion in the previous corresponding period. This was within our expectation, as there were no major launches in 9M2015. Residential properties accounted for more than two-third of its property sales, with the remaining from commercial properties.

We continue to like UOA for its above-market average yield, high profit margins, cash rich balance sheet and growing base of recurring income.

Unbilled sales stood at RM1.5 billion at end-September 2015, which should sustain earnings until March 2017. Furthermore, it is expected to register higher recurring income starting this year, following the launch of Nexus in September last year. The integrated lifestyle centre at Bangsar South has total net lettable area of 300,000 sq ft with over 90% occupancy rate.

Dividends totalled 13 sen per share last year, giving an attractive yield of 6.2%. We expect the company to maintain dividends at 13 sen this year, supported by its substantial cash reserves and solid earnings visibility.

Valuations are attractive at a trailing 12-month P/E of 8.1 times and 1.1 times book. Excluding net cash, the company is selling at a trailing P/E of 6.2 times only, compared to the industry’s average P/E of 9-10 times. Of note, most property developers are in net debt position. 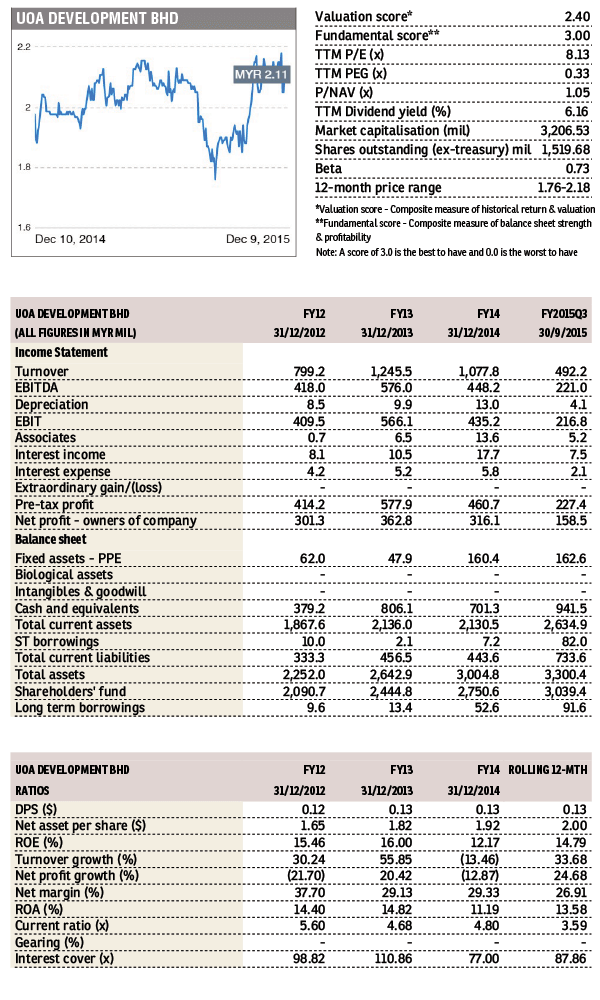