This article first appeared in The Edge Financial Daily, on December 15, 2015.

WE continue to favour Supermax (Fundamental: 1.0/3, Valuation: 1.4/3) for its comparatively undemanding valuations and strong growth potential. Its peers Hartalega, TopGlove and Kossan are trading at trailing 12-month P/E of 25.2-40.8 times and 4.3-6.5 times book. In comparison, Supermax is trading at 30-50% discount with trailing P/E of only 17.2 times and 1.8 times book.

The stock has been a laggard for the past one year (+47.5% year-to-date) compared to the other Big Four glovemakers (+62.2-146.9%).  This was partly due to repeated delays in commissioning its new plants, which affected its financial performance. However, we believe Supermax has largely overcome the issue, judging from its latest quarter results.

For the quarter ended September 2015 (change in FYE to June from December, starting FYJune2016), revenue grew 11.3% y-y to RM309.9 million, thanks to higher output from the new production lines and efficiency gains. Net profit surged 38.3% to RM38.5 million, boosted by increased sales of higher-margin nitrile glove and the stronger USD.

Going forward, we expect Supermax to continue its strong double-digit growth momentum, underpinned by the two new plants in Meru, Klang, which has started production in batches since early 2015. The plants will have a total of 40 production lines with installed capacity of 600 million pieces of nitrile gloves per month.

When fully commissioned at end-2015, total production capacity will increase by 40% to 25 billion gloves per year. Higher-value nitrile gloves will then account for 53% of its total installed capacity.

Supermax was recently awarded one of the licenses to supply medical gloves to the UK’s National Health Service (NHS) for the next four years. The NHS, which covers all hospitals in the UK, consumes approximately GBP50 million (about RM327.6 million) of medical gloves per year. Assuming a conservative 25% market share, this contract alone would contribute an additional 8% to its topline, starting FY2017. 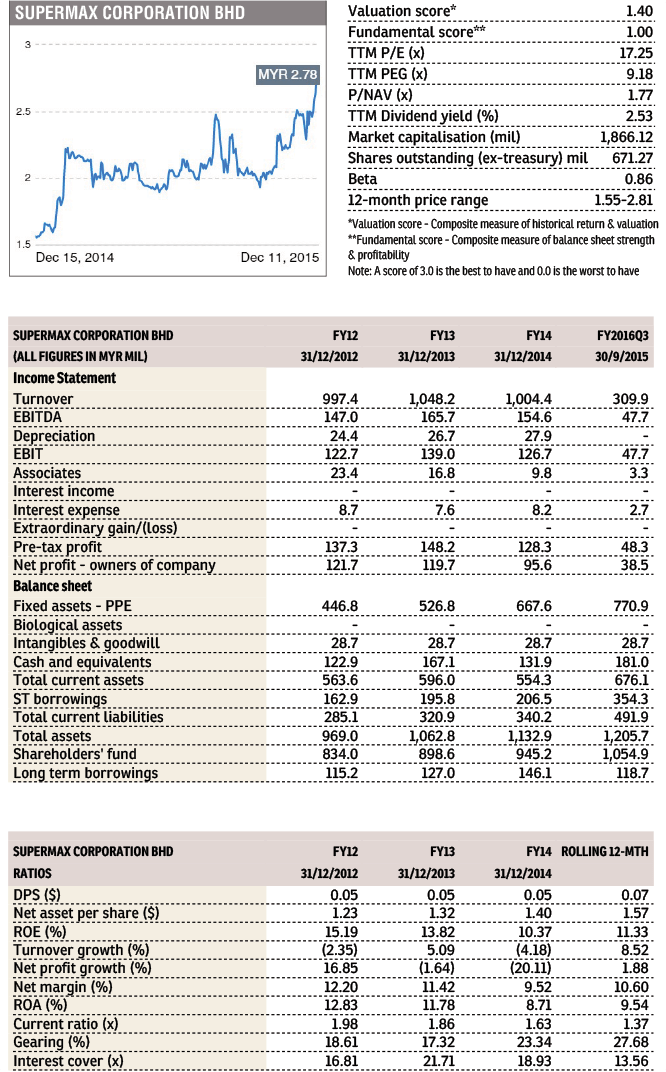 1 person likes this. Showing 4 of 4 comments

With fact10and11ready capacity wud be further boosted .being a laggard catch up game to reflect industry norm esp pe multiples gives the co lots of catch up game to do .With new UK contracts and improved revenue and weak rm profit bottom line shld improve .with top glv selling at fwd pe of 25 times spmax shld follow suit and expected to hit rm5 soon

A co unfairly bullied and sold down on instruction .gods great .Allow other funds to collect and participate the growth of a well managed blue chip. The wind is blowing ur direction Let the share fly .Show them!!!!!!