This article first appeared in The Edge Financial Daily, on December 7, 2015.

Since we first recommended Uchi Technologies (Uchitec) (Fundamental: 2.4/3, Valuation: 1.5/3) on June 24, the stock has risen by 10% to a high of RM1.77, before closing at RM1.73 last Friday. We continue to like Uchitec for its steady earnings, attractive yields and exposure to export markets.

To recap, the company’s sales are derived from two main product groups: Art-of-Living (high-end consumer electrical appliances including fully-auto coffee machines) and Biotechnology (laboratory & industrial equipment). Europe — mainly Germany and Switzerland — is the company’s main market, accounting for 95% of its revenue in 2014.

Uchitec has a solid track record, having consistently turned in a profit since 2000. Over the last five years, revenue has been range bound between RM92-104 million, while net profit hovered between RM39-53 million. For 9M2015, revenue grew 15.7% y-y to RM82.2 million while net profit rose 8.3% to RM33.5 million. Excluding extraordinary items, comprising mostly unrealised losses on derivatives, net profit increased 34% to RM39.9 million.

Investors should note that Uchitec will not benefit fully from the stronger greenback. The company has hedged an amount equivalent to 56% of its 2014’s revenue at RM3.7787 as at end-September. However, the remaining unhedged sales should translate into better profit margins.

Uchitec’s steady earnings have enabled it to maintain consistent stream of dividends, with payout exceeding 90% since 2011. Dividends totalled 10 sen per share for 2014, giving an attractive yield of 5.8%. Last month, the company proposed an interim dividend of 5 sen for 2015.

We believe Uchitec will continue to pay higher-than market average dividend yields, supported by its cash rich balance sheet and strong operating cashflow. At end-September, net cash stood at RM153.3 million or 40 sen per share, about 23% of its market capitalisation. With current cash, Uchitec would be able to support dividends at 2014’s level for the next four years. 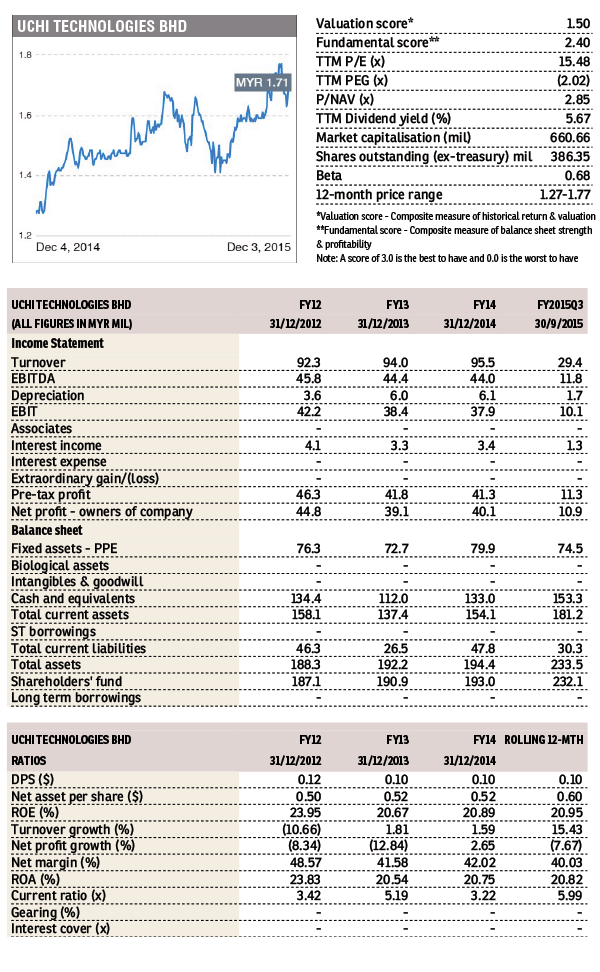