This article first appeared in The Edge Financial Daily, on December 17, 2015.

The wood furniture maker derived 63% of its sales from the US and 24% from Canada with the remainder from UK, Malaysia, Singapore and the Middle East. As such, it will be less affected by the slowing local economy as the demand is primarily driven by economic growth in North America.

The company has manufacturing plants in Vietnam and Malaysia, after ceasing its China operations in 2013. The local operations have undergone a rationalisation exercise to focus on higher-margin office products while the Vietnamese operations focus on labour-intensive bedroom furniture, shipping some 63% of total sales.

Poh Huat has pared down its borrowings over the years, gearing falling from 11.5% in FY10 to net cash of RM20.7 million as at end-July. Thanks to the higher sales orders and better economies of scale, ROE jumped to 19.7% from 8.1% over the same period.

Peers Latitude and Lii Hen both reported stellar results for 3QCY2015. Poh Huat will be releasing its seasonally strong 4QFY15 results by end-December. We expect earnings for the quarter to be boosted by higher shipment from the Vietnamese arm, favourable exchange rates and margin improvement for the Malaysian operations.

Dividends have been on the rise for the past three years — dividends for 9MFY15 increased to 3 sen per share from 2.5 sen a year ago. In the last financial year, FY14, dividends totalled 4 sen, giving a yield of 2.2%.

Valuations are attractive relative to its positive sector outlook, earnings visibility and dividend upside. The stock is trading a shade higher the sector’s trailing P/E of 10.8 times with a market capitalisation slight below its trailing 12-month sales. 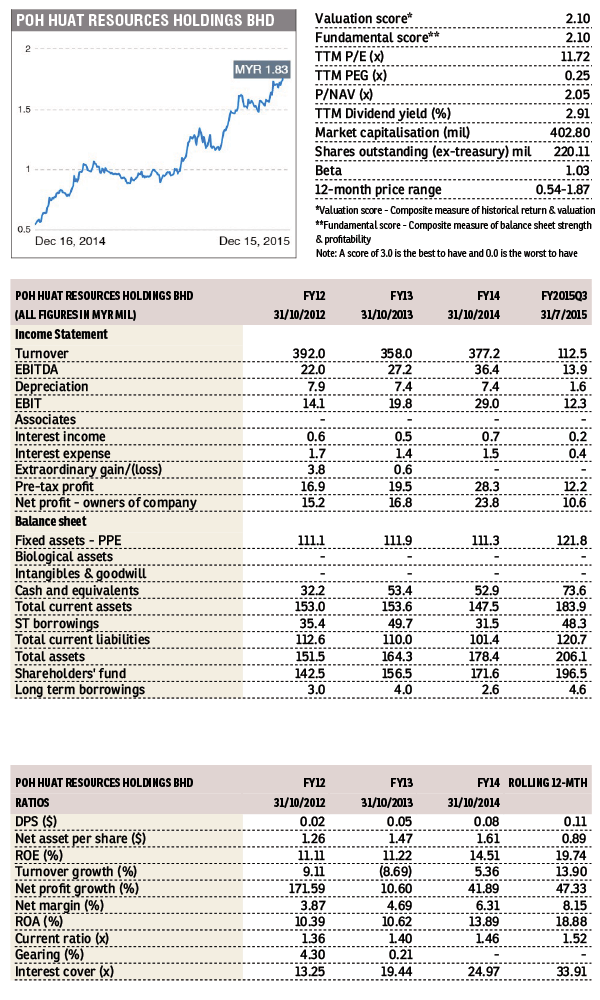