For a copy with better formatting, go here, its alot easier on the eyes.

This pandemic has changed the way people travel and their modes of transportation.

With the virus around, people who previously used public transport, now much prefer using their own vehicles which have resulted in increased demand for vehicles.

Due to the ongoing pandemic, there is a much stronger focus on vehicles that are, cheap and have value for money. As a result, the three main beneficiaries are as follows.

In addition, the government have also announced SST exemption (100% on locally assembled cars, 50% on imported cars) till 31 December 2020 to spur sales.

Why is this the case? This is due to income levels in the M40 and B40 rising slower than in previous years, resulting in a stronger focus on cheaper and value for money cars. This pandemic has further strengthened this focus.

Currently, the cheapest (all-in ownership cost) and most fuel-efficient car in Malaysia is the Perodua Bezza 1.0 G (A Proton Saga 1.3 Base is cheaper by about RM2k but is 30-40% less fuel efficient). The release of this car also resulted in a strong increase in revenue and profit for Perodua.

Unlike companies like DRB-HICOM, who has many other businesses, many of which are loss making during this COVID period, and thus mask the increased earnings from PROTON. The earnings and dividends contributed by Perodua is usually around 75% of MBMR’s earnings and cashflow.

However, despite being expected to record explosive earnings in Q3 and Q4, MBMR is currently selling at RM2.85, far below its Pre-covid valuations of RM4.0 and is selling at just 4 PE today.

Despite large dividends by Perodua to the MBMR, the dividends paid by MBMR is usually lower, why is this the case?

As we can see here, this is mainly due to a large loan taken out in 2011. Since then, the reduction in dividend pay-out was mainly due to cashflow being diverted to pay off this loan. When the MBMR turned strongly net-cash in 2019, dividends payment tripled. In addition, as we can see here, the other segments of MBMR usually generate additional cash as well. So why was the loan taken out in 2011?

In 2011,a loan of RM370m was taken out by MBMR for the privatization of Hirotoku Holdings Berhad which cost a total of RM410 million (to this day, this company is run by the Japanese Partner). This company is primarily in the business of manufacturing Acoustic and Safety Products for vehicles.

In addition, in 2012 the company also started OMI Alloy (M) Sdn Bhd, an alloy wheel manufacturing company. Both companies are under the Auto Parts Manufacturing Segment.

How has these companies performed over the years?

For Hirotako Berhad, earnings have fallen somewhat since the glory days of 2009-2013, however it is still quite profitable. However, the lower profitability did require a write off on goodwill in 2017.

But for their alloy wheel manufacturing company OMI Alloy (M) Sdn Bhd, it performed badly due to China flooding the market. This loss-making division have been shut down in 2019 and would no longer result in losses for the company.

What about their other division, the Motor Trading Division?

Its profitability fell during the 2013-2017 period but have since risen again to all time highs due to the release of the Perodua Bezza. The contribution by Perodua have also increased to record highs.

Both segments are likely to contribute positively to the record earnings to be recorded by Perodua for Q3 and Q4, as well as in the future.

How has Perodua performed during As we can see here, in the month of April and May, sales have naturally fallen due to the controlled movement order. However, since then, Perodua’s has soared far above its 2019 sales numbers.

For the other carmakers, there is a slight purchase backlog factor, which have result in sales increasing in the subsequent months, but they have since fallen back down.


Perodua on the other hand, have increase continued to record increasing sales numbers, Perodua’s monthly sales for September and October have broken their 27 year record for 2 consecutive months.

This is due to the change in traveling methods, where people no prefer to travel in their own cars, and the strong focus on a cheap and value for money vehicles, for which the Perodua Bezza ticks every box.

Given what we know about the company, we first get some baseline assumptions using the 2019 numbers.

As we can see here, on average, Perodua contributes RM 781 of profit to MBMR per unit of vehicle sold in 2019. (There is various product mixes etc)

And on average, the non Perodua segments contribute about RM 3.471m in net profit per quarter. (As associate contributions and dividends is not taxed, we can just deduct the Perodua Contribution from the Net Profit of MBMR)

With these assumptions in mind,

It appears that MBMR is going to post record operating earnings for the Q3 2020 (RM55.3m) and Q4 2020 (RM60m). As of today, they are still producing vehicles at maximum capacity (appoximately 25k per month) to be sold.

The question now is this.

Will most of these profits be paid out as dividends, or used to purchase other companies or PPE?

There are a few things to note. With these in mind, I think that for the FY2020, at minimum RM100m (70% of earnings) would be distributed as dividends by MBMR, this translates to 10% dividend yield. 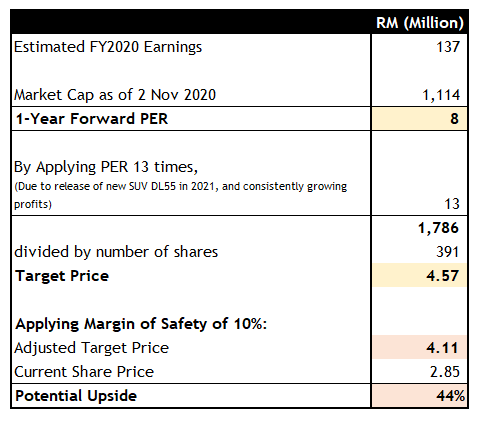 For the purpose of calculating and initial target price, I will use my projected 2020 full year profit of RM137m.

This is extremely conservative, considering their normalized profit in 2019 and 2018 is RM184m and Rm166.8m

In addition, there is the release of the highly anticipated new SUV, the DL55, which is based off the Daihatsu Rocky, and expected to again focus on value for money, like the Bezza

Given the conservative assumptions, only a small discount in relation to margin of safety is needed. Target price is dynamic, however I think this works well as a mid-term investment as well.

And, One Last Thing. It appears we are not alone, in the last few months, there have been very strong institutional buying. Much of it likely due to the factors explained above.

I have both, MBMR is bigger size though. Because lots of money coming out as div.

Another note, many people say that the sales volume is boosted by the sales tax exemption. If one is to study the quantum of discount before and after the exemption, it is on average 3% savings of 2-3k only. I don't think such a minor discount can drive such strong sales. Therefore, I think it is credible that avoidance of public transport is also responsible in driving the strong sales, playing straight into the private transport theme. Therefore, should the sales tax exemption be removed next year, I think sales should still be resilient at around 20k unit per month.

Choivo still around? not arrested by SC for giving out stock recommendation without license?

After what happened to Choivo Lctitan prediction .. no more looking at another Choivo prediction.
Once bitten, still want to be bitten again???

Remember With Rm 126m to Rm 131m net cash in Netx with the RI completed ,u can find big opportunity mah...!!

In addition there is a bigger skin in the game, where management confidently buyout netx & had put in rm 36m of its own hard own money to be the new substantial shareholders loh...!!

Everything is reset for Netx, it is the beginning of a New Era & a new prosperous technology NETX Mah....!!

Remember Technology business high growth sector must have some exposure when they are opportunity get it for a song like Netx mah..!