For a the original copy with high resolution pictures, better formatting and additional details.

This writing is based on my own assumptions and estimations. It is not a buy or sell call of the company and the contents of this report should not be considered as professional financial investment advises or buy/sell recommendations. I strongly encourage you to do your own research and take independent financial advice from a professional before you proceed to invest. I make no representations as to the accuracy, completeness, correctness, suitability, or validity of any information on my report and will not be liable for any errors, omissions, or delay in this information or any losses and damages arising from its display or usage. All users should read the posts and analysis the information at their own risk and we shall not be held liable for any losses and damages.

Out of all my picks this year, the one that is currently underperforming in terms of price movement is myNEWS, and most of it is due to the Q4 2020 results which appear lackluster on the surface.

However, unlike my other picks, which are mostly turnarounds (due to high commodity prices, which may be transient), I consider this as a long-term investment (with upcoming catalysts).

And as I said in my previous research, when it comes to long term investments, the focus is not on short term price movements or next quarter results, but keeping track on the business in terms of

How the revamp is going?

How are the CU stores going?

How is the Food Processing Centre Utilization Rate and Wastages? Etc

Having said that, for many people, even if one understands the business well, falling share prices have a way of making one feel a certain trepidation in their hearts.

For many (including myself), we were expecting a stronger recovery in terms of the financial numbers for Q4 2020.


However, it materialized in a slower than expected manner in Q4 2020, and there are a few reasons for it.

Slow Recovery 1 – Recovery in
Shopping Malls being the slowest

Despite the recovery in terms of movement in Malaysia, and road congestions again happening around Malaysia, as we can see in this chart by TomTom below,

Shopping malls (which consist of 80% of myNEWS store mix) experienced the slowest recovery, with numbers only really picking up in December 2020.

The reason for this simple, by virtue of typically having the highest density, its recovery will be slower.

When it comes to travelling during this period of COVID-19 when cases are high, people do not go from staying at home all day, to gallivanting around in malls the next moment.

And so, in terms of footfall traffic, myNEWS’s recovery should mainly happen from November onwards.

Since the start of this pandemic in March 2020, the gestation costs relating to the Food Processing Centre (“FPC”) segment have increased.

Most of this is due to the pandemic and flip-flopping government policies which caused erratic and huge fluctuations in day-to-day sales which made the production planning difficult and products wastages high.

However, much of it is also likely due to a RM1.7m one-off Property Plant and Equipment write off’s/impairment relating to the FPC.

*Losses in Q4 for RTE JV is higher likely due to impairment of PPE.

Q4 2020 was the first time in myNEWS history that such large PPE impairments have occurred.

For shop closures, many items can be reused, and any fittings that cannot be reused (This amounts to RM60k-RM80k per store) is impaired during the quarter itself. 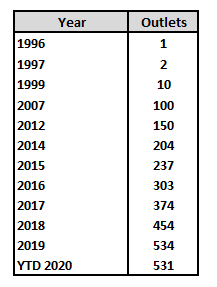 As you can see based on the store numbers, I do not think this is the case.

My guess is that the above is related accounting adjustments related to impairment on PPE for the RTE, requested by their financial auditors during the year end audit, due to the extended gestation period and costs.

Having said that, the numbers above hide a few very interesting developments.

As I explained in my previous article, one very good thing about the COVID-19 pandemic for myNEWS is it gives the management time to improve their own processes, as acknowledged by the management themselves in the Q3 2020.

Was this really the case?


One of the major expenses and problems with the RTE was high wastages. However, if we are to look at the wastages for this year 2020.

One of the main cause of wastages was the usage of third-party logistics companies.

Before this, when the goods mainly consist of dried goods with long shelf life, having precise control over the timing and movement of the product from each store was not necessary.

However, when your RTE goods have a shelf life of just 3 days, the usage of third-party logistics is no longer viable as they cannot fit your timing and schedules exactly every time.

In Q4 2020, myNEWS have completed their exit plan from their third-party logistics partner, and have fully insourced it, enabling it to fully control movement of products and its inventory management, resulting in the wastage reduction of 64% that we see above.


This also further prepares the company for the opening of the new CU stores in Jan 2021, which will now increase utilization.

During the latest analyst meeting, myNEWS also indicated that they would be opening 100-120 new stores with 30 – 50 of them expected to be the CU stores (it could be a higher percentage if the CU stores do better).

So far, I don’t think the market has fully priced in the reaction of the Malaysian public towards the new CU stores. In general, Malaysians have a real love towards all thing’s food, new, and Korean/Japanese.

When comparing the food between myNews and Family Mart, they are more similar than not However, I do think Family Mart is much better marketed than myNEWS, with a very strong focus on Ready to Eat Meals by virtue of their Japanese Branding and Konbini Roots.

The CU brand aims to replicate this, except with a novel Korean concept. And I have no doubt that when the first CU stores open in January, there will be pictures of people queuing outside the store.

And when these pictures appear, the investment community in Malaysia is likely to wake up and start to find myNEWS shares very attractive again.

And looking at the sharp increase in Capital Expenditures in Q4 2020, I think things should be on track.

For a Retail Convenience Mart to succeed in this day and age, you need a reason for people to walk in the store. And because Newspapers & Magazines no longer cut it, the main method is via Food/Dessert/Sugar.

For example, when I think of Family Mart these days, the first thing I think about is the Sofuto Ice Cream. It is very rare that a customer comes in and leaves without buying a Sofuto Ice Cream (it is not so obvious with the Oden, which I think is just normal and overpriced).

During the last few months, myNEWS have also identified this key need and have been working hard to innovate and find this defining food item.

And just last month that have released the above 3 items, which indicates improvement in the menu and dessert line.

It would be great if myNEWS had a killer dessert that engraves the urge to visit the store, in the minds of the public.

And lastly, one thing I’ve forgotten to include in my previous article. Since October 2020, Aberdeen have appeared as a major investor in myNEWS with a larger than 5% stake, and since then they have only added more.

They also increased their stake after the Q4 2020 quarterly results was announced on 21 December.

The price at which that purchased their position like range from RM0.55 – RM0.80 looking at stock volumes over the last 6 months.

For investors, we should have our own opinion on the value of the company. Having said that, the ability to buy shares in myNEWS at the current price, which is likely to be a discount to Aberdeen’s cost price, provides a kind of comfort and is a nice little bonus.

This quarter, my main takeaway is the drastic action taken by management to solve RTE wastage issue by in housing their logistics systems, and its success in execution has resulting in a 64% reduction in food wastage, as well as the new CU stores likely to open mid-January, as well as encouraging progress in the search of a defining item.

Considering that Mr Dang Tai Luk is the kind of person who could code by himself the initial software that tracked inventories etc when he first started the store, I have little doubt that the rest of their plans would be successful and 2021 will be a very good year for myNEWS.