Malaysia:. The FBM KLCI (+0.8%) recovered all its previous session losses, mainly driven by gains in Petronas-related and telco heavyweights yesterday. The lower liners extended their lead, while the consumer products & services sector (+2.3%) took the top spot on the winners list amongst the mostly positive sectorial peers.

Global markets:. The US stockmarkets surged higher as the Dow rallied 2.2% after US Federal Reserve Chairman, Jerome Powell signalled for a potential slowdown in the pace of monetary tightening. The European stockmarkets also advanced, while Asia stockmarkets ended mostly positive.

The FBM KLCI rebounded in tandem with the regional bourses as bargain hunting activities emerged in the mid-day trade. With the strong surge on Wall Street, the positive sentiment may spillover to stocks on the local exchange; buying interest has returned following the US Fed Chair’s speech on scaling back the pace of interest rate hikes as well as the easing restrictions in selected region in China. Meanwhile, on the local front, investors may monitor the formation of the Cabinet and the re-tabling of Budget 2023. Commodities wise, the crude oil price surged above USD86 per barrel mark, while the CPO price hovered above RM4,200.

Sector focus:. Investors should see buying momentum building up in technology stocks following the sharp gains in Nasdaq as the narrative from the Fed is turning less hawkish. Besides, investors may favour the energy counters following the surge in crude oil price and the positive earnings growth registered in the recent reporting season. 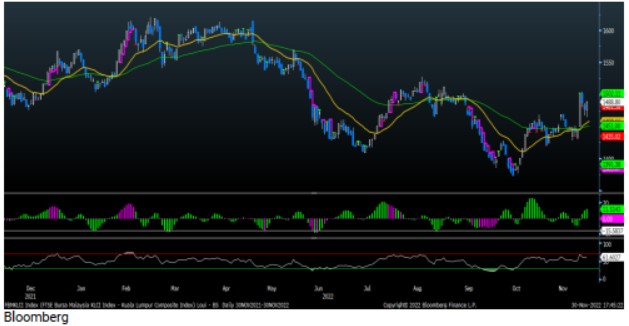 The FBM KLCI ended in the positive territory after recouping all its intraday losses. Technical indicators remained positive as the MACD Histogram extended a positive bar, while the RSI is hovering above 50. Resistance is set along 1,490- 1,500, while the support is located around 1,430-1,450.

Axiata Group Bhd, Telenor Asia Pte Ltd and Digi.com Bhd (Digi) have completed the merger of the telecommunications operations of Celcom Axiata Bhd and Digi. Celcom Digi will be the largest local listed technology company on Bursa Malaysia. As part of its nation-building efforts, Celcom Digi would also invest up to RM250.0m over five years to build a world-class innovation centre in Kuala Lumpur. (The Star)

CIMB Group Holdings Bhd’s 3QFY22 net profit stood at RM1.41bn vs. a net loss of RM100.6m recorded in the previous corresponding quarter, largely due to significant growth in operating income and the absence of exceptional items in 3Q21 relating primarily to the non-cash write-down in value of CIMB Thai. Revenue for the quarter rose 13.6% YoY to RM5.00bn. (The Star)

Tycoon Tan Sri Syed Mokhtar Albukhary’s daughter Sharifah Sofia is stepping down as a non-executive director of Pos Malaysia Bhd. Her resignation will be effective 20th December 2022. Sharifah Sofia was appointed to the board on 13th April 2018. (The Edge)

The AEON Consortium comprising AEON Credit Service (M) Bhd, AEON Financial Service Co Ltd (AFS) and MoneyLion Inc (MLI) has announced the appointment of Raja Teh Maimunah Raja Abdul Aziz as the chief executive officer of its digital bank that is expected to launch by end of 2023. (The Edge)

Capital A Bhd’s 3QFY22 net loss widened to RM901.3m vs. a net loss of RM887.0m recorded in the previous corresponding quarter, as the group was impacted by a share of loss from associates and foreign exchange losses. Revenue for the quarter, however, surged 6.6x YoY to RM1.96bn. (The Edge)

Serba Dinamik Holdings Bhd's 1QFY23 net loss swelled to RM104.6m, from a net loss of RM42.1m recoded in the previous corresponding quarter, dragged by losses across all of the group's segments bar its education and training segment, as well as RM67.24 m in corporate expenses and consolidation elimination. Revenue for the quarter declined 73.3% YoY to RM213.6m. (The Edge)

Berjaya Corp Bhd’s (BCorp) 1QFY23 net loss narrowed to RM16.4m, from a net loss of RM59.3m registered in the previous corresponding quarter, as most of its business segments showed better performance. Revenue for the quarter for the quarter grew 62.0% YoY to RM2.24bn. (The Edge)

Pesona Metro Holdings Bhd has received a takeover offer from major shareholder Wie Hock Kiong to acquire 278.0m shares or a 40.0% stake in the group at a price of 19.0 sen per share or RM52.8m cash in the event of full acceptance of the offer. The mandatory takeover offer comes after the 62-year-old acquired an 80.0% stake in Kombinasi Emas Sdn Bhd from his younger brother Wie Hock Beng, who is also the managing director of Pesona Metro, for RM18.1m. Kombinasi Emas, which will be wholly-owned by Hock Kiong, controlled a 41.5% stake in Pesona Metro as at 17th November 2022. (The Edge)